Those ever-lovin' Royals have made it into the history books again.

The team handed the most paradoxical of all possible volitional acts in the world of baseball--love bestowed uncritically by erstwhile "sabermetricians"--has found a way to undercut that devotion even while achieving post-season success for the second straight year (yes, yes, you'd really better stop the presses before they overheat and explode).

How have they done that, you ask? By simply swinging the bat.

KC has become the first team to have back-to-back appearances in the post-season boasting offensive totals where their team total for batters' walks is below 400 BB. 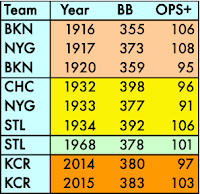 It's only the ninth time a playoff team has had 399- BB since 1914. As the chart at right shows, until the Royals did it for the first time in 2014 it had only occurred once in the past eighty years.

And now they've done it again.

We used to think that teams who didn't add to their OBP dimension by drawing more walks than the league average were doomed to failure. (Most of the playoff-bound teams with ultra-low walk totals were average offenses at best.)

This precept is probably still more true than not, but leave it to the Royals to wave a large, counterintuitive bear claw at those of us trying to get through our silly vacation drive in a National Park to be named later without being mauled to death.

The Royals are proving that the sabermetricians who love them are forced, if not to look the other way, then at least to keep their car windows closed as they cruise through the post-season.
Posted by Near-Genius Nephew at 11:22 PM