It's essentially a two-man race for the Cy Young Award in the 2015 AL. 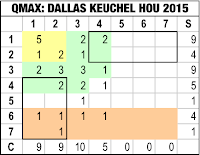 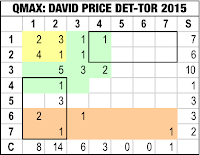 Two lefties--veteran David Price, whose 230-mile relocation from Detroit to Toronto was a significant component in the Blue Jays' drive to the AL East division title, and Dallas Keuchel, whose steady performance (particularly at home) was central to the Houston Astros' ability to hang on despite a rocky second half (just 28-30 from August 1st to the end of the season)--were the league's best starting pitchers.

The Quality Matrix (QMAX for short), invented in these parts some twenty years ago, gives it to Keuchel by virtue of him having a larger number of "top hit prevention games" (the S12 region, the top two rows in the QMAX matrix chart).

Particularly decisive was Keuchel's higher number of "1S" games (and his lead in 1,1 games, which tipped his "quality winning percentage" (abbreviated "QWP") higher as a result of a more marked probability of success in such games (the "1S" row produces a projected WPCT of .860; the 1.1 square is better than that, with a .915 WPCT over the past three seasons).

Here are the top six starting pitchers in the AL according to QMAX. Felix Hernandez was hit hard a good bit between late May and late August--definitely much more of a Jekyll-Hyde performance from him than in any previous season.

Sonny Gray was ahead of the pack in mid-August, but gave ground down the stretch. Sonny has a slighter build than the others on this list: he might need a little extra care in how he's used in order to avoid what looks like a case of wearing down as the season goes on.
Posted by Near-Genius Nephew at 11:16 PM