TRADE DEADLINE FRENZY AND THE WAR OF "CONVENTIONAL WISDOM"...

Yes, we cheated with the date...you can do that in Blogger (which, we suspect, will soon be a plot point in the new tech-geek noir series Mr. Robot). You see, we just knew that Ben Lindbergh would flap his wings somewhere over the Atlantic (not needing to get more than halfway to Paris to receive his "Lucky Lindy" accolades...) so having the data "pre-dated" (BTW, could that be a new slogan for on-line romance sites?? Oog, we hope not...) conveys our foreknowledge of just how the utterly odd numberologist meritocracy operates on the other side of its seams.

Of course our old pal Rob Neyer (not quite as much of a Mexican jumping bean in the employment department as Joe P., but some legends are best left alone...) jump-started the process in late July, when responding to the 7/31 trade deadline frenzy (there! we managed to tie this back to the subject line in less than two grafs--buy a round for those folks reeling over there at the bar!). Rob has always let others do the heavy lifting with the numbers (and why not--it just works up a sweat...) but his remarks about the trade deadline were another reminder of how he can be obtuse and acute at the same time, all while not knowing which is which.

Taking Wins Above Replacement (yes, that battered WAR-horse) as his Empedoclean jumping-off point, Rob dismissed (or, should we say more charitably, showed marked skepticism about) the entire "clown car show"--you can figure out where we lifted that one from--that was the 2015 trade deadline frenzy (there...twice in three grafs! That's the type of emphatic emphasis that might get us an interview with the Trump campaign).

Rob said (and we baldly paraphrase): since even the best player only generates about six WAR in a year, renting him for what is essentially the last third of the season only produces a small gain, so why bother?

Of course Rob then went on to ignore his own caveat and become embroiled in the "2015 trade deadline frenzy" (we must not be remiss in using the phrase AND honoring our contractual obligations to our long-suffering sponsor, "Fright Quotes R Us," a company that suffers fools just as well and as fast as you can make 'em), which is one of Neyer's classic M.O.'s (and, despite what he likely thinks, we love him for it). 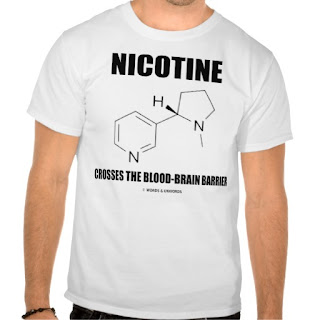 What's missing, of course, is any follow-through with respect to this radical concept ("What if it doesn't matter?"). It's as if Rob's appendix--a remnant organ of the human body with no actual function except to go kerblooie in one out of every 934,477 members of the world population--tried to give his brain a vestigial reminder of the old days when he would actually do some research about some such assertion or question, and actually penetrated the blood-brain barrier, only to be drowned in a rampant, raging wave of glibness-inflused capillaries. (Hey, it happens to the best of us...Bill James just gave a soggy interview in which he plagiarized and bowdlerized himself at the same time.)

So, the question on the floor is (still is, that is...): does all this frenzy make any difference in what happens over the last third of a season? Glibsters of all denominations will focus on one player or one sequence of events out of context and trumpet it as "the key" to how things went down during late-season crunch time, but they don't capture anything large scale. And none of the tools developed by the numberologist wing gives us any direct way of measuring this--using WAR for this is a mystical sidetrip that's more like a pale sugar high as opposed to the hallucinogen-infused scientific prolegomena that it's cracked-up to be.

Which brings us back to Lindbergh, whose (G)rantland post-mortem on the 2015 trading deadline frenzy put a trace element of numerical context into play (providing, as he often does, a high-level summary with a patina of surface allure that is ultimately bereft of actual analytical value). Yes, Ben, we can tell that the GMs went batshit crazy in 2015--sure, the charts show that, but a) we knew that already and b) they really don't show anything else...is there some actual meaning or context in the yearly fluctuations? And God forbid that we would try to analyize-predict-summarize the use value of this escalating fact of life in the little world of baseball insider squirmy-poo...

So, as is so often the case, we'll wrench a few precious minutes out of all the other things we are juggling (including those chain-saws we got in the deal for Melvin Upton, Jr.)--all those books and festivals on French film noir, the documentary film about Don Murray, etc., etc.--in order to generate a template for how to approach this subject.

Sure, it will be simplistic: there's no reason for it to be anything else. We need to measure the results, and by results we mean what actually happened in the won-loss record. Measuring how much WAR penetrated the blood-brain barrier is too ethereal to be of much use.

So the chart below, which uses 2014 for purposes of this presentation, captures the minimum of what we need to collate in order to begin the type of research that could be helpful in understanding what actually happens as a result of late-July "body wrangling" (in other words, something well beyond the well-wrought words of pundits dancing around a maypole of contingency). 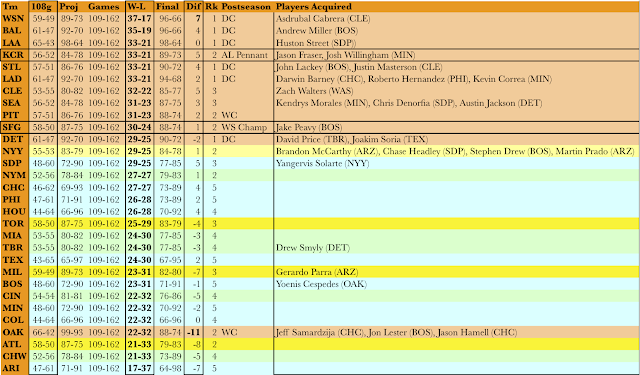 Here you have the teams ordered in terms of their won-loss perframance over the "third third" (last third, games 109-162) of the season. You have their record up to game 108, the "straight projection" of what their 162-game W-L record would be, their actual record at the end of the season, the difference between the projection and the actual--and, finally, at right, the players they acquired at the end of July.

As you can see, it's mostly a self-fulfilling exercise--or, at least, it was so in 2014. Nuances that Lindbergh completely ignores, such as how many big-name (higher-WAR) players might be coming up for free agency in any given year, can make the process fluctuate significantly from year to year. What we see is that ten of the twelve teams who made the 2014 post-season gained ground from their projected season W-L record. (An average of 3 games better the ten teams that gained.)

There was one raging anomaly: the Oakland A's, who frittered away 11 games from their projection despite their trading activity.

There were also three teams (color coded in bright yellow) who were in the playoff hunt after 2/3rds of the season but made little or no trading effort and did the fall-down-go-boom thing (Blue Jays, Brewers, Braves). The Blue Jays didn't repeat that behavior this year.

And, finally, there were the Yankees, faced with unaccustomed oblivion, who actually made the biggest player grab this time last year, and got a boost of exactly one game over their pre-rearrangement projection...

You could (if you had time, and especially if you were being paid by so-called reputable sports media companies...) make such diagrams for all of the seasons since, say, 1995, and have a sense of how all this works. We doubt anything we say will chasten or motivate the fine feathered "friends" we are ruffling here to do so, but stranger things have happened (yes, that brings us back to the Trump campaign again, doesn't it?) Lord help us all...
Posted by Near-Genius Nephew at 9:53 PM