Can teams overcome consistent mediocrity in one major performance area and make it into the World Series?

Of course they can...it happens more often than one thinks. For example, there have been fifteen teams who've made it to the World Series whose starting pitcher performance was below the league average for the season un question.

Most of these teams got a lot of wins in the regular season from their starters: five of the fifteen logged 70+ wins from the pitchers who took the mound in the first inning. And, of course, none of these starting rotations were conspicuously under the league average: the worst was about 9% under the aggregate.

Note that only four of the fifteen teams on the list managed to win the World Series (*). 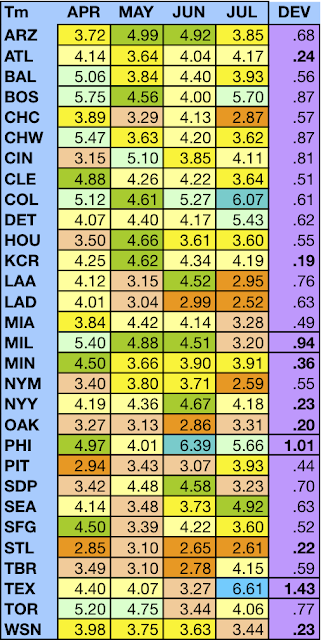 Now we seem to have another team--those wonderfully confounding Kansas City Royals--who are trying to up the ante on their counterintuitive success last year with a close variant of the same. The Royals might become the first team to reach the World Series with their batters drawing less than 350 walks. But that would mean that they'd have to keep their hitting shoes on in all the games where their starting pitching (weaker than last year) flounders.

How have they gotten to a .600 WPCT? A bullpen that is amped up to an historic level of performance,  for one thing. And solid timely hitting across many of the splits (late and close, RISP, high leverage, game tied, two outs).

And, as our buried lede for this post demonstrates (in the table at right), they have been getting exceptionally consistent mediocre starting pitcher for the first four months of the 2015 season.

As you can see, the Royals have the lowest deviation in their monthly starting pitcher ERA numbers.

Indeed, it seems that consistent monthly performance (within some range of reasonable effectiveness) is what contributes to teams who exceed their Pythagorean projections.

Now, of course, you need exceptional performance from your bullpen to offset mediocrity--that's clearly happening for the Royals, and that's also the case for the Yankees. The A's, whose starters have been consistent on a monthly basis, don't have the benefit of even a good bullpen, so their consistency hasn't helped them stay in the playoff hunt.

The average deviation for MLB thus far is .59. The Royals and Yankees, despite having starting staffs whose overall performances are below league average, are managing to reap benefits from consistent mediocrity. It might be fitting if they face each other for the AL pennant.
Posted by Near-Genius Nephew at 9:51 PM