A quick one as we work up another, more elaborate "tale of two-dimensionality"...

Not that TOOTBLAN isn't worth some of your time. However, there's more to baserunning than just how often players get thrown out. (This is another area where Bill James pushed folks down a particular path only because the data was suddenly so easy to compute...he's had more than his alotted share of these moments.)

What we need are some benchmarks. Forman et fils take us part of the way with their presentation of baserunning advancement data; they decided to lump all advancement together, though, despite having enough detail in the three separate advancement categories mentioned above. 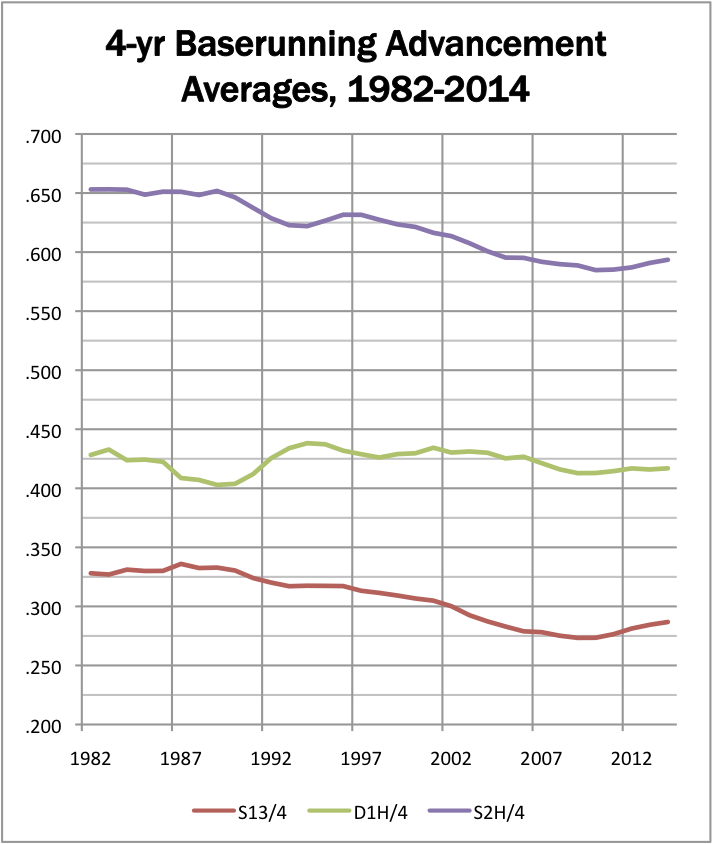 So we decided to provide that detail--and, while we were at it, graph the changes that it has undergone over the past thirty years.

By collecting, collating, and averaging these three advancement categories, we can see if things like run-scoring levels, increases in home runs, etc. are having an effect on how often baserunners take extra bases.

And our chart at right suggests that it's a kind of "split decision" (you know, the ones that make boxing fans suspicious). It turns out that there's been a noticeable decline in the percentages for going from first to third and from second to home on a single (red line and purple line respectively).

(Note that these figures are the decimal equivalents of percentages: .700 at the top means 70%, etc.)

So what's causing it? High run scoring? Complacency? More aggressive outfield play? The vagaries of globalization?? Hard to say. But it's clear that baserunning has become more conservative over time. Whether consistently lower run-scoring levels will eventually affect these trends is something about which we'll simply have to "wait and see." The trend lines are pointing slightly up. We can only hope, of course--the fact of the matter is that this is another indicator of the game's creeping rapprochement with two-dimensionality...and it really would be a good idea to reverse the trend.
Posted by Near-Genius Nephew at 8:18 PM