As the World Series stays close despite a dearth of close games, it's actually past the time when we should be trotting out one of our favorite toys.

What's that, you ask? Neither a train set, nor Peter Max's soon-to-be-auctioned collection of classic Corvettes.

No, it's the Quality Matrix, or QMAX "for short"--sorry, have to keep the FQQ (that's "fright quote quotient") up at a certain level of frequency per month or risk being mothballed by our surly sponsor--which, as you doubtless recall, is our tool for measuring starting pitcher performance.

QMAX remains a very fine suite of value and shape stats, with the added bonus of creating a bushelful of matrix charts that will either liven up any East Coast cockfight or make terrific abstract wallpaper for those who are tired of those predictable floral patterns. 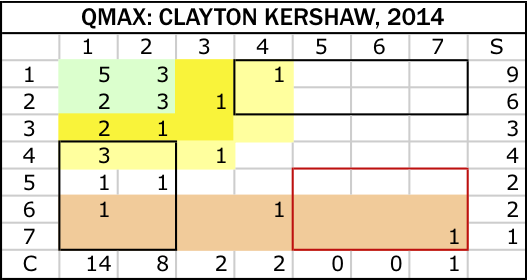 And we are surprised--really and truly--to report that the NL race, which we're covering here in the first of two lightning-fast posts, turns out to have been a lot closer than the conventional wisdom indicated. 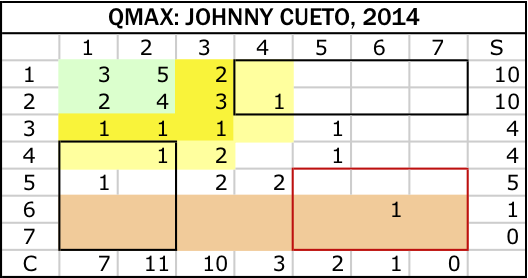 Measuring as it does a probabilistic accounting of hit and walk prevention, QMAX produces not only raw averages for each of these quality components, but also generates a winning percentage (we call it QWP--pronounced "quip"--for QMAX Winning Percentage).

Most folks figure that it's a slam dunk for Clayton Kershaw, who had a great season and was rewarded with a great won-loss record (21-3). When WPCTs are that high, even the neo-sabe contingent don't put up much of a fight: it's slack-jaw time for the jackdaws (all except for Mickey Lichtman, who will tell you that none of 'em should ever pitch more than five innings). 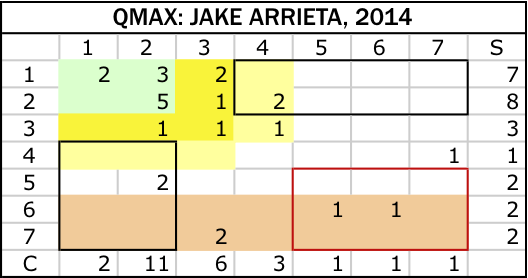 Interesting food for thought--that said, it's unlikely that Cueto is going to come in anything other than a distant also-ran to Kershaw. But Johnny had a helluva year. 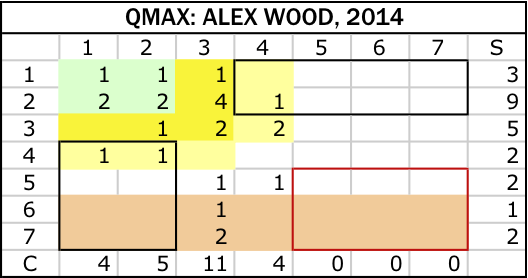 A .700 QWP is terrific, although it doesn't resonate in terms of the MVP voting until the value increases to at least .750.  So both Kershaw and Cueto could very easily get mentioned in the lower reaches of the MVP ballot, based on QMAX. (In a year with few offensive standouts, they are likely to do a good bit better in the real-life voting.)

Here are a few more of the QMAX matrix boxes for 2014 NL starters. 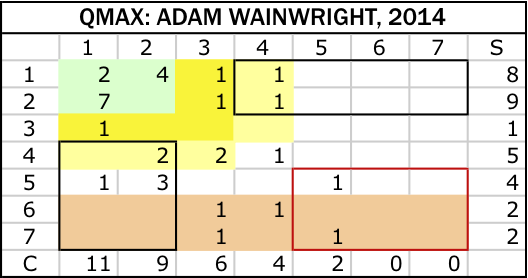 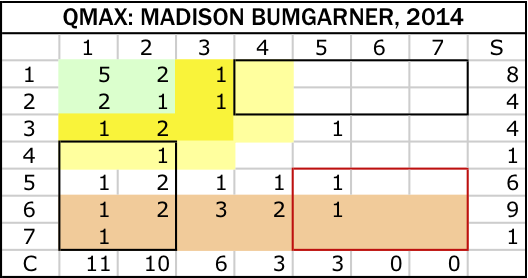 Madison Bumgarner's playoff run is actually rather uncharacteristic of his 2014 season. His high S12% (53%) shows that he's eminently capable of stepping up to a dominant performance. For the Giants, they're most fortunate that he's decided to have a sustained run of it in the post season.

The new stat in the "QMAX range data" (sorry--but the FQ police are out there lurking,,,) is HQ. It represents the percentage of starts in which the pitcher gave up at least as many hits as innings.

Anyone who can get below 30% for this measure is doing quite well...and in this measure Kershaw is actually only fourth best among 2014 NL starters. Oh, he's very close to the lead, but he's behind young Alex Wood of the Braves; the resurrected Jake (Don't Call Me Jesus) Arrieta, who brightened the Cubs' season; and "Dreadlock Johnny" (Cueto).

Posted by Near-Genius Nephew at 11:34 PM