VETS COMMITTEE SHAKES OFF ITS STUPOR (SORT OF...)

You may have been one of those who scoffed at our notion of "tactical Hall of Fame" voting. (It would be hard to separate such scoffing from the general derision that seems to invade any aspect of a discussion about the HOF, however.) But the good folks who are on the latest incarnation of the Veterans Committee have done just that with their recent trifecta of inductees (Bobby Cox, Tony La Russa, Joe Torre). 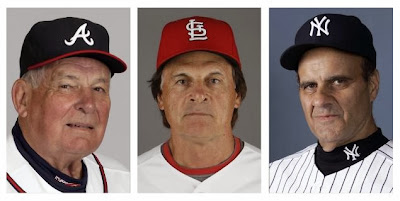 And that is (mostly) a good thing--though it would be nice if the Committee could actually find a way to induct a player of at least semi-recent vintage on the sole merits of their playing career. This still seems to be an event that has been blocked by some type of childhood trauma, however....some kind of "group therapy" may be needed to make that possible once again.

Of these three, Torre is the closest thing to a on-field Hall of Famer; his playing career has much to recommend it, including a nifty reinvention once he arrived in St. Louis. As a manager, he's clearly the least of the three, though he had an undeniably impressive run with the Yankees.

Cox and LaRussa have undeniable managerial credentials, and it's a fine thing that these three--who are so close in age--will go into the Hall at the same time. That's what we call good tactics...even if what the Vets Committee is doing is more than a bit transparent.

Our old sparring partner Jay Jaffe suggests that George Steinbrenner, Billy Martin, Ted Simmons, and Marvin Miller should (have) be(en) selected. We don't have a problem with any of that (no spit-takes, Jay!!), though it's a cryin' shame that George and Billy are both no longer with us--it would have been worth the trip to Cooperstown to see the two of them on the same dais.

And it would have been so touchingly American to see a convicted felon and an incorrigible alcoholic be given the fist-in-glove treatment at the holier-than-thou HOF.

But we'd add another name to the list--Tommy John. Forget all the numbers preachments, please. Tommy is in the 99th percentile in terms of squeezing the most out of his talent, a consideration that rarely if ever comes into play for those who spend their lives wielding spreadsheets. And part of that involves having had the courage to be the very first pitcher to undergo a procedure that, at the time, was  a complete crapshoot in terms of its potential for prolonging a career.

Ironically, John's achievement may have been victimized by the subsequent ubiquity of the procedure. It's easy to forget just how cutting-edge all of that was back in 1974.

That pioneering step--coupled with the fact that Tommy won more games after his surgical milestone than he had prior to it--is more than enough reason for the Vet Committee to give him the nod.

So while it's great to see the three managers get their due--and the HOF will take advantage of the photo ops they'll provide, particularly if the BBWAA takes a powder again this coming January (chances are slim, but it pays to consider all possibilities)--the Vets Committee really needs to start putting players into the Hall.

They can start doing just that with Tommy John.
Posted by Near-Genius Nephew at 12:47 PM