A quick note as the post-season motors forward, desperately trying to keep our minds off the epic struggle developing between Alex Rodriguez, MLB, and the soon-to-be-deployed army of suits who will do everything to dissuade us from the naive notion that "...the world could be a better place."

The following is a much paler shade of cautionary tale, to be sure. 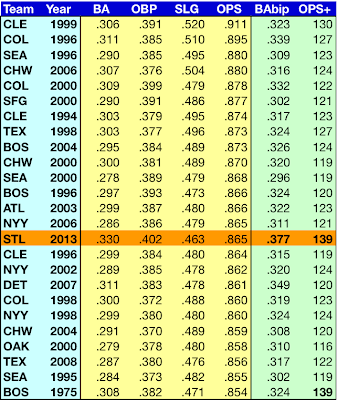 Many of you have probably read that the St. Louis Cardinals set a record this year for the highest batting average with runners in scoring position (RISP). They hit .330 in those situations.

However, they didn't come close to having the highest OPS (theirs was .865, very good but tied for 16th place (as you'll see in the chart at right).

They did have an amazing BABIP (batting average on balls in play), in large part because they didn't hit very many home runs in RISP situations. That BABIP was a staggering .377, which looks like the best value by far (at least in the seasons for which we have the data: this info, available at Forman et fil through their Batting Splits option at the indispensable Play Index--you must subscribe for access, is linked to the play-by-play data developed by Retrosheet).

Now we still have some residual fondness for the Cards, despite our singular skill at remaining neutral about any individual team--that stems from our long-term friendship with Brock Hanke, diehard Cardinal fan and our man in St. Louis for more years than either of us care to remember--so the following is not snark.

Those gaudy, season-long RISP totals don't automatically hold up as any kind of predictive indicator of post-season success. We will grant that the top 25 teams in RISP OPS (sounds an awful lot like the CIA, doesn't it??) make it into the post-season a lot (about 60%, if we're eyeballing the chart correctly...), but there are exactly two World Series winners on this list ('98 Yankees, '04 Red Sox).

We'd love to see the post-season RISP values for the post-season teams on that chart, but Forman et fil haven't gotten that query developed just yet. (One of these days.)

What we do know is that it's not continued thus far in the post-season for St. Louis. After the first three games of their NLDS vs. the Pittsburgh Pirates, the Cardinals are (thus far) 3-for-20 in RISP situations.

[UPDATE: When you have Adam Wainwright, you don't really need to hit in RISP situations. The Cardinals' ace pitched them into the NLCS, scattering eight hits as St. Louis won, 6-1. The Cards' RISP score for this game: 2-for-6, making them 5-for-26 overall for the NLDS. The Pirates, on the other hand, were 7-for-20 in RISP situations...which makes one wonder if teams with better RISP performances in individual games actually see that advantage translate into wins more often than not.