BIG PAPI AND THE HALL OF FAME/2: OPS+ BY AGE RANGES

The incredible World Series just turned in by David Ortiz has many folks suddenly envisioning him as a Hall of Famer. (Could they have read it here first??) 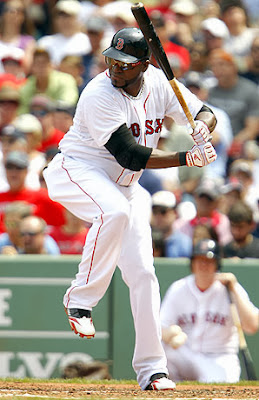 As it turns out, however, Papi's case for the HoF has been gaining in strength for some time now. His 2013 campaign, one in which his performance at DH was the key reason for the Red Sox' return from the dead, was in itself a validation of his viability as a Hall of Famer. We've already looked at his superb age-37 season and where that ranks in the pantheon of such seasonal performance; this time, we'll look at what we like to call (for as long as we can remember, which means as we "wing it" for you right now...) as the "three ages of hitting greatness."

What the heck are those? They are three roughly equal career segments for hitters: the "young" period, which includes everything up to the age-26 season; the "prime" period covering ages 27-32 (a bit further that what is fashionable in the eyes of various numberological cadres....), and the "oldster" period, from age 33 on.

These "three ages" work quite well at showing us how Hall of Fame voting has worked over time, and demonstrates a kind of unconscious (hey, let's be fair, and call it "semiconscious") coherence in the voting results.

So how does it work? We examine all of the hitters who post an adjusted OPS (OPS+) of 130 or higher in these three age ranges. We use an OPS+ of 140 as a "cutoff" point for determining the percentages of hitters who are elected to the Hall, and make a series of frequency comparisons.

When we look at that data, we find that it's about four times as easy for hitters in the so-called "prime" years (27-32) to have an aggregate OPS+ of 140 or higher over that six-year span than it is for the "oldsters" (33+). The total number of "prime" age hitters who achieved that (a minimum of 2500 plate appearances over all time frames is necessary in order to make the list) turns out to be 104. (There are another 106 who had OPS+ figures between 130 and 139).

The 140+ "oldsters" are much scarcer: there are only 25. The "youngsters" are pretty much right in between these extremes: their total of aggregate 140+ OPS+ performances up through age 26 is 59.

Put another way, the 25 "oldster" hitters who still crack 140 on the OPS+ scale represent just 13% of the overall instances of such a level of performance.

So where does David Ortiz rank in that "oldster" list? He comes in a #19, with a 142 OPS+. (He's in the top group found in the impossibly long chart over at the left. (You'll have to click on it to actually read it: sorry about that. The three changes in color coding represent the breakpoints at 140 OPS+ for each age group: orange for 140+, followed by yellow for 130-39.)

The chart is organized with the players ranked by "oldster" performance first, then by "prime" performance, and finally by "youngster" performance. All of the players in bold type are already in the Hall; all of the players whose names are in blue are those who we figure are locks to get in at some point in the future--in the case of Barry Bonds, that will be a good bit further into the future, but it will happen well before the earth is turned into a molten set of cinders by some future holocaust.) 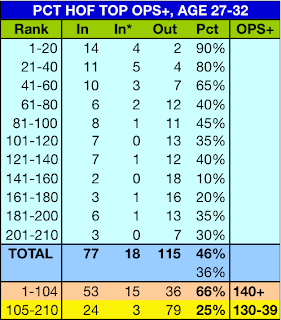 Papi's placement in the "oldster" group turns out to be significant for his chances at making the Hall. We've developed three summaries for each age range that show the percentages for players in the Hall of Fame based on the performance criteria. As you'll see, the HoF induction percentages for high-achieving "oldsters" is much higher than the other two ranges. 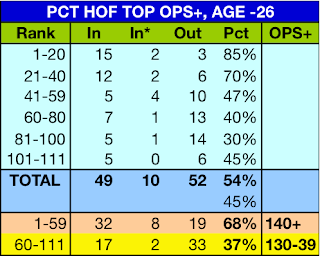 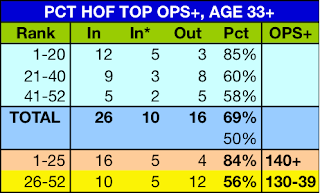 The charts at right (which are a good bit more readable--Amen--than the monster chart that's still over on at left) show that there's a mostly linear result as we go down the rankings. Things get a little wacky in the "prime" group, because a certain number of the hitters in the lower reaches of that chart (more than 200 total names on it...) are players from more difficult defensive positions (C, 2B, SS, CF, 3B) who've gotten some contextual consideration.

So Hall of Fame voters have managed to recognize that older hitters who sustain a higher level of performance are special enough to induct. And David Ortiz meets that criterion--at least through the 2013 season, where his age 33+ performance comes in (as we said above) at 142 OPS+ and ranks 19th among those players. 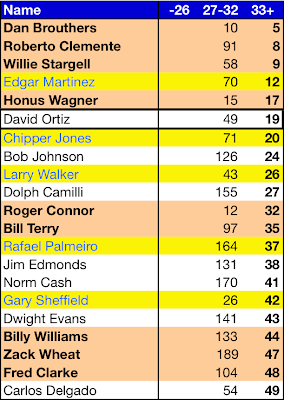 Ortiz belongs to another list, however--and it's one we should look at. It's a list of players who didn't have a great start to their careers (age -26) but who made great strides in their "prime" years and had at least a 130+ OPS+, and who sustained that success in their "oldster" phase.

There are 22 hitters on that list. Nine of them (Dan Brouthers, Roberto Clemente--with the most dramatic improvement in the transition from "prime" to "oldster" of any player in baseball history--Willie Stargell, Honus Wagner, Roger Connor, Bill Terry, Billy Williams, Zack Wheat, and Fred Clarke) are in the Hall. Five more (Edgar, Chipper, Larry, Raffy, and Gary) will eventually get in.

It's hard to imagine that Papi won't be the sixth, given where he sits on the list (above everyone but Edgar).

There are those who'll quibble with longevity issues, but Ortiz is one of those special hitters who came close to equaling his "prime" year performance as an oldster. Since both of those aggregate performances are over 140 OPS+, it would actually be something of a travesty were he not to get in.
Posted by Near-Genius Nephew at 9:54 PM