WHEN THE STOCK MARKET LOOKS LIKE A WPA CHART

By the way, Rob Neyer, that's "Win Probability Added." You're probably having trouble remembering it because the name was coined by an old BBBA guy (Doug Drinen). After all, you did your best to block us out of your mind back in the day, n'est-ce pas? 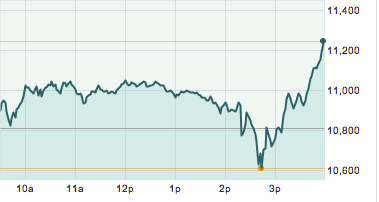 Anyway...one needs more than bile to have struggled through today's NYSE session, which (as the chart capture to the left demonstrates) was as volatile as any roller-coaster baseball game. The forces of optimism (some would say these folk are delusional...) were pitted against the forces of destructive free-market tooth decay (some would say these folks are long overdue for a rabies shot...) in an epic struggle.

This is probably the best possible abstract representation of the clash between these competing impulses as they currently square off in our meta-polarized society. Today the good guys won, but the battle (which is, of course, much more complex than a one-day NYSE trading chart) is going to be with us for a long time to come.

But do take a moment to note that said chart bears an uncanny resemblance to the WPA chart (yes, yes, the "inverted" WPA chart) for Game 7 of the 1960 World Series.

Talk about a furry freak o'nature...
Posted by Near-Genius Nephew at 8:51 PM