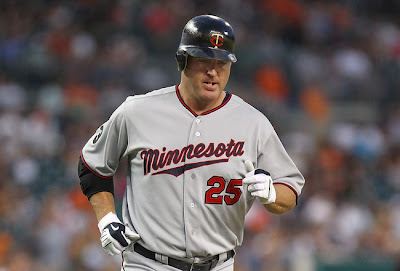 Congrats to Jim Thome on the occasion of HR #600... despite Jonah Keri's odd rant (and methinks that the site he was writing for should really change their name to "Rantland"--though the hip chimps who scribble for them are clearly not quite up to the standards of actual diatribe...) he is unquestionably a HOFer, and most likely a first-ballot selection. (As stated elsewhere, the operative theory here is that four individuals--Barry Bonds, Mark McGwire, Roger Clemens and Rafael Palmeiro--are going to take the brunt of the "roid rage" from the BB-WAA, as those punctilious pontificators really can't afford to ban everyone who played in the "silly ball" era.)

'Twas also spiffy that Jim smacked two HRs in a game to get to the round number. Not quite sure if anyone else has pulled off that feat...sounds like a Forman et fils type of question, so we'll leave that one to them. Thome has had 46 two-homer games and two three-homer games in his illustrious career, all pretty much "in the pocket" with respect to long-ball heroes.

Of course, this is a outpost that is more ideologically aligned with outlier events...so let's wander off on a variant of Thome's story--three-homer games. The players with the most such games aren't necessarily the ones with the highest number of lifetime homers (Hank Aaron had only one such game; Babe Ruth, two).

Who has the most three-homer games? Why, the law firm of Sosa and Mize, with six three-bomb games apiece.

Sammy is the only slugger in baseball history to have three such games in a single season (2001). 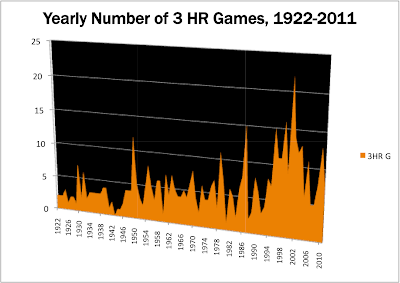 Mize's penchant for big-game bombs is probably more impressive, however, when you consider that it was decidedly uncommon for folks to have such explosions back then.

As our yearly chart of 3-HR games demonstrates, the penchant for the "homer hat trick" is decidedly linked to the recent past.

1950 was the first year in which there were more than ten such games; at that point, the total number of such games was less than a hundred. 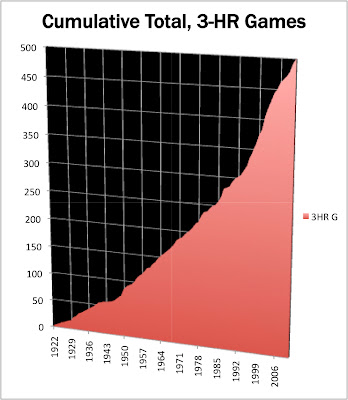 What outlier-style minds really want to know, however: who are the guys who managed to have a three-homer game despite the longest possible odds working against them?

Let's face it, sluggers like Ruth, Aaron, Sosa, Mark McGwire, Thome, Griffey, Barry Bonds, etc., etc. are supposed to have games where they go deep in clusters. And the list of leaders tends to bear this out:

It starts to get a little odd with two, however. There are a few names that are a bit more eyebrow-raising.

Well, Claudell Washington, for one. Claudell hit 164 HRs in his career, but the idea that he had two three-jack games is definitely a head-scratcher.

And do you want to know that such a feat was also accomplished by the likes of Bobby Higginson, or Darnell Coles, for Crissakes?

Johnny Gomes? Aaron Boone? No, we aren't hallucinating, though things might be better if we were.

That's just the random wackiness of baseball at work. And, of course, we need to take this down to the lowest of all low common enumerators--who hit the least number of career homers while still managing to have a three-homer game?

Before we do that, though, let's note that Coles is not the guy with the fewest lifetime HRs to have two three-homer games. Coles had just 75, but the honor goes to the great and colorful pinch-hitter deluxe of the New York Giants, Dusty Rhodes, who hit just 54.

That ratio (1 out of every 9 homers accounted for by the three-homer game) is going to be tough to beat, but there are a number of guys who managed to get there. Let's start with a few also-rans... 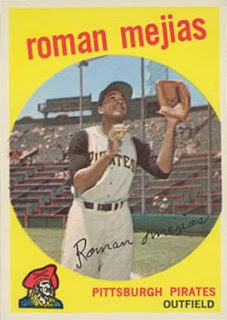 First, there's Roman Mejias. With 54 lifetime homers, Roman isn't really close, but his three-homer game did not occur during his lone solid year (1962, when he hit 24 HRs for the first-year Houston Colt .45's). His "homer hat trick" occurred on May 4, 1958, when he was still a member of the Pittsburgh Pirates. Going into that game, Mejias had only five lifetime homers, so you could say that he is the real outlier here--but we don't want to end our fun on some weird technicality, now, do we?

Of course not. Going down that list toward the impossible perfection of hitting-three-homers-in-a-game-and-getting-hit-by-a-garbarge-truck, we have the following:

These bruisers are still motorvatin' along at a pace where their three-HR games are less than 10% of their lifetime total. We're now about to move into the territory that aces out Dusty Rhodes.

Jeff is technically tied with Dusty, who had two post-season HRs to give him a revised total of 56. Jeff hit three homers in Philadelphia on May 26, 1990. There's probably a correlation with odd movements on the stock market with these guys, but we'll be damned if we're gonna do that much research.

The man who will now always be known as "The Other Manny" looked like he was going to be a good hitter--he hit .301 for the KC A's in '62, but he got off to a slow start in '63 and he was sent back to AAA. While he destroyed the PCL for a couple months, he never seemed to really pay attention at the major league level after that. His three-homer game came on July 4, 1964: the game, fittingly enough, was a 6-6 tie. 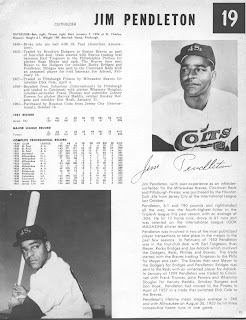 We generally don't remember Boros as a hitting prospect, but the one-time bonus baby did put up some big HR numbers in the minors (though we should take that 30-HR season at Denver in 1960 with a grain of salt). He did hit 16 HRs for the Tigers in 1962, including three in a game on August 6th.

Negro Leaguer Pendleton had spent four years in the Dodgers' system before getting traded to the Braves prior to the 1953 season. He had just one major league homer on August 30th when he hit three homers against the Pirates. Pendleton hit .370 down the stretch for Milwaukee, but they seemed to know something...he hit only .220 the next year and found himself back in the minors in '55.

Backup catcher Wilber hit three homers off junkballing lefty Ken Raffensberger for the only runs scored in the second game of a doubleheader on August 27, 1951.

Tobin is the only pitcher in the history of major league baseball to hit three homers in one game. His "homer hat-trick" came on May 13, 1942 in a game he won for the Boston Braves, 6-5.

Leppert, another career backup catcher, hit three homers for the Senators (now the Rangers) against the Red Sox on April 11, 1963.

Ortiz was part of Billy Beane's "bait" to acquire an actual big league hitter (Jermaine Dye) back in 2001. Jose had put together a monster season at Sacramento in 2000 (.351, 24 HRs) and Beane dealt him for Dye in late July of the following season. Three weeks later (August 17), Ortiz hit three homers in a game against the Florida Marlins. By the end of 2002, however, he'd played himself out of the big leagues--though he did resurface in 2007 and has turned in solid seasons in both the Japanese and Mexican leagues.

Rhodes had a great month of April for the Cubs in 1994, beginning on Opening Day (April 4th), when he slammed three homers. (The Cubs lost anyway, 12-8.) He had a .996 OPS going into May, but hit just .201 for the rest of that strike-shortened season. Rhodes would drift back to the minors in '95, but would begin a notable career as a slugger in Japan beginning in 1996, continuing all the way until 2009.

So did Tuffy eclipse Dusty as the guy with the highest "homer hat-trick day to lifetime bomb" ratio? Well, yes, he did...but the question needs to be asked: is Tuffy low man on this odd little totem pole?

And the answer is...no, not hardly.

Connors hit 400 HRs in the minor leagues (though most of that was in Class C ball: he never stacked up to be much of a real prospect). The White Sox, however, gave him two "cups of coffee" in 1937 and 1938. He'd hit three lifetime homers by the time he got another start against the lowly Philadelphia A's on September 17, 1938: two days earlier, Merv had drawn the collar over a doubleheader against Connie Mack's doormats (0-7 over the two games).

It was another doubleheader on the 17th, but the extra rest must have worked wonders for Merv,  because he went 4-for-4 with 3 HRs against Jim Reninger (on his way to an 0-4 lifetime record). His homer hat-trick doubled his lifetime total: he'd hit two more in what proved to be a glorious month (.355, .710 SLG).

The next season, though, he was hurt in spring training, wound up in the minors, and struggled all year, hitting just .229. He never made it back to the big leagues.

So Merv is our "outlier ratio king" for this impossibly obscure statistical oddity...he comes in at 3 out of 8, or 37.5% of his lifetime homers hit in a single afternoon. Hey, it's easy to hit just one lifetime homer--ask Hoyt Wilhelm--but it really takes application to hit three in one game and manage to wind up with a major league career total in single digits.

One last thing to send over to Forman et fils--the White Sox lineup in this game makes one wonder about  the lineup in baseball history where the starters combined for the fewest number of major league games. I don't think that this lineup is particularly close to the record (whatever it may be), but it does give one pause: there are three players who started for the Pale Hose in the second game of the 9/17/38 double bill with less than 100 major league games, one with just 203 games, and another with only 343. (And let's forget about that "forfeit game" from May 1912 where the Tigers fielded a bunch of semi-pros in protest of YATCS--Yet Another Ty Cobb Suspension.) Let's have the real answer, OK?
Posted by Near-Genius Nephew at 10:04 PM