Here's just a quick look at the data relevant to the question posed in the title...we've included Tampa Bay, San Francisco and Houston because they are all still in the hunt for a favorable slot in the post-season, as opposed to grabbing a wild-card slot.

It's been a fluid year, and despite whatever misgivings one might have about the state of the game on the field, the higher quantity of teams still in the hunt for the post-season does mitigate those concerns, as the emphasis shifts to specific teams and their need to win.

Here is the data, with the explanation for the color coding following below: 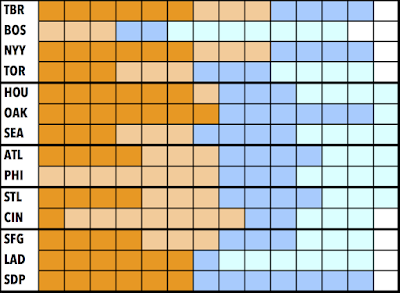 Light orange represents home games against teams no longer in the playoff hunt.

The darker shade of blue represents road games against teams still in the playoff hunt.

The lighter shade of blue represents road games against teams no longer in the playoff hunt.

When one eyeballs the color coding, what emerges is that the Red Sox, who've been floundering for much of the second half of the season, seem to clearly have the easiest set of opponents, even though they are playing the most road games. The problem for them, though, is that they are not an especially good road team.

The teams with the toughest remain schedule appear to be the A's and the Padres, with the Yankees next. The Rays are right there with them, but Tampa has a 7 1/2 game lead and a fold now would be something akin to the phamous phold by the Phillies back in 1964.

Speaking of the Phillies, they still have a chance to overtake the Braves, who've lost four in a row going into today's games. One senses that only one of the two NL East teams will make the playoffs. In the NL Central, the Cards have opened a lead, but they have a tougher remaining schedule than the Reds. These two teams are likely vying for the somewhat dubious chance of playing either the Giants or the Dodgers in the wild-card "bakeoff" game.

The team not yet discussed: the Blue Jays. They have a reasonably favorable schedule, and their team has been coming together more consistently than any of the others in the AL East. They have what people like to call an "exciting young club," and Vlad Jr. looks like a chip off the old block.

No predictions here, but if rooting from knee-jerk underdog mode, one might hope for a finish like this:

(We flipped a coin between CIN and STL, and our pal Brock Hanke--born, raised, and all-life resident in St. Louis, intercepted the coin in mid-air.)

Your mileage may vary, of course. Regardless of how it turns out, a baseball September of anticipation is something to savor. With so much other unwanted uncertainty, here at last is some suspense that we can actually enjoy: go for it.

Posted by Near-Genius Nephew at 2:44 PM