So Shohei Ohtani now has 40 HRs...the last coming on August 18th (as he also continued to make a strong case for the MVP Award by throwing eight strong innings, improving his '21 won-loss record to 8-1).

It's the dual thing that's truly special, of course, but the Angels--missing Mike Trout for more than three months due to a calf strain that has apparently taken on epic proportions--aren't going anywhere in the pennant race. Thus the media is still making a bigger to-do over Ohtani's HR total, even though (as we will see) it is only mid-pack in terms of "per-game pace" since the end of the dubious century and the beginning of the downright rotten one.

Don't misconstrue (or, as Marvin Milkes used to say to Jim Bouton, "misconscrew") what we're saying: Ohtani's HR pace is impressive. The chart below, however, takes a good bit of the gasbaggery out of the  lingering heavy breathing. As you'll see, Ohtani is tied for fourteenth on the list of 21st century HR leaders as of August 18th. 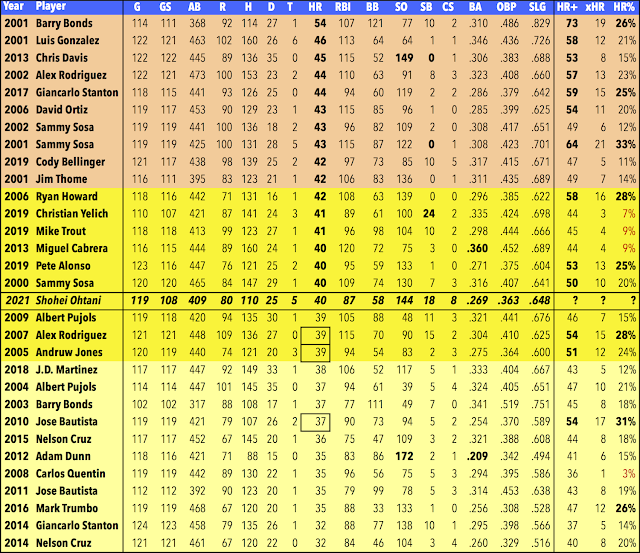 We gathered up all the leaders from 2000-2019 and 2021, including the folks below Ohtani (in order to provide total context) and added in their final HR totals for the year in question. The hitters who hit 50+ HRs in these years have those totals shown in bold type: 13 of them made it across that line.

The average % of HRs added from August 19th to the end of the season for this group works out to 19%. If Ohtani matches up with that average (a rare feat: as you can see, the %'s are all over the place), he'd wind up with 49 or 50 HRs for the year.

Perhaps a more useful mode of assessment, however, is to look at the Angels' remaining schedule and examine how Ohtani has done against the teams he'll be facing. The Angels have seven games left with the Astros, and six each with the Mariners and the Rangers. It turns out that these teams are three of the four teams Ohtani has struggled with the most in '21: he has an aggregate batting average of .213 against them (though he has hit a total of nine HRs against them, over a total of 36 games).

If he matches that HR pace in those 19 games, he'd hit 5 more homers against them. That leaves 21 more games on the schedule, with Ohtani's biggest opportunity coming up in the next 7-10 days, when the Angels will face the pitching-strapped Orioles at Camden Yards, where they've given up nearly two HRs a game this year. If there is any place where Ohtani is going to redeploy his prolific home run stroke, Camden Yards is it. (We will be very interested to see if Joe Maddon decides to push back Ohtani's next start, which is scheduled for that series: doing so would allow him to concentrate on his hitting and permit him to take his next turn on the mound at home, where conditions are more favorable.)

If Ohtani could hit four HRs in Baltimore and match his pace in the games against the Astros-M's-Rangers, he'd had 49 HRs with 18 more games still unaccounted for. That would be the scenario that would give him a very good chance to push his total into the mid-50s and fully justify all the heavy breathing we've been surrounded by since his magical six weeks before the All-Star break, when he hit 18 HRs in 34 games. As we always like to say at this point: stay tuned...

Posted by Near-Genius Nephew at 11:40 AM