THE GOLDEN AGE OF DOUBLES: YOU DON'T MISS YOUR WATER...

Golden Ages are never what they're cracked up to be, for two reasons. First, those who tout them, even assiduous students of history with iron-clad methodologies, are either slaves to hierarchy or have a hidden agenda. Second, no one seems capable of determining that they are, in fact, living in such an exalted era during the time in which it occurs.

Or if they do proclaim a Golden Age in the present moment, we are strongly cautioned to return to reason number one: Ye Olde Hidden Agenda. That's why some folks (no names here: we'll let you find them on your own...) will proclaim that we are living in a Golden Age of home runs. But such things are not supposed to be, nor can they be, in reality, things that go on interminably. We've had a so-called Golden Age of homers since around 1994, give or take a lull in the early years of the last decade, when what we really are having is an extended pandemic of long balls that have finally begun to take their toll on baseball's version of an ecosystem.

And in that protracted, unyielding and ultimately insufferable and stultifying onslaught of homers, there was a true Golden Age that came into being unappreciated and virtually unseen. It took shape in the offensive explosion of the 1990s, flying under the radar as offense in general reached levels not seen in sixty years. But oddly--and somewhat gloriously--it sustained itself after the peak of that run-scoring explosion had passed. 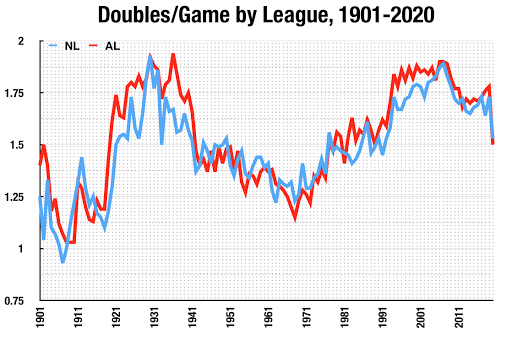 It was the Golden Age of doubles, the two-base hit--the Middle Way in the shape of offense. As the chart at right demonstrates, it was the longest and most consistent level of high achievement in the history of the game. And it passed us by after close to two decades of silent, unheeded existence.

The earlier peak levels for the two-base hit were much spikier, as the chart also shows us. The American League reached what we might call "Golden Age" territory first, shortly after the start of the live ball era in 1920, with the National League following suit in the run-up to 1930, the biggest offensive season in history for nearly seven decades.

But the NL falls off quickly from that pace, and despite another peak from the AL in 1936 we see the first Golden Age of doubles dissipate. Two-base hits become significantly less abundant for forty years, driven down by the game's first systemic uptick in homers, followed by the overcorrections imposed on offense in the sixties. A slow but steady uptick begins in the mid-1970s; doubles manage to hold their own through the roller-coaster ride for home runs as the 1980s play out. And so they are primed for a big jump when conditions for offense burst back into existence in 1993--with that Golden Age of doubles taking hold in both leagues shortly thereafter. It was a double-barreled Golden Age, as the chart demonstrates: it represented a uniform offensive strategy employed across both the AL and the NL. 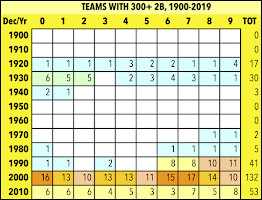 We can look at this in another way--one that depicts the emphasis on hitting doubles as brought into play over the history of the game. The two tables displayed here show the number of teams hitting 300+ doubles in a season: the first table shows the raw number of teams in each year who meet or exceed that standard. From looking at the 2B/G chart, you'll not be surprised to see what is a nearly forty-year gap in teams hitting 300+ 2B's in a season (from 1941 to 1978). And the Golden Age of doubles as measured this way can be seen in the 1996-2009 time frame. 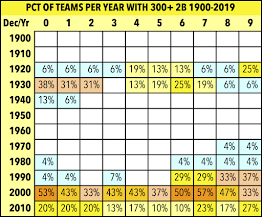 Of course, no team will come anywhere within a hemisphere of 300 2B's in 2020. But the chart at top shows an unprecedented drop in 2B/G occurring this year--not quite a stock market crash, but what folks in the financial world like to call a "correction." Is it a one-season blip, or has the emphasis on homers finally reached a tipping point for other forms of offense? We won't know the answer to that for awhile, but what we do know is that the Golden Age of doubles is not coming back anytime soon.

Posted by Near-Genius Nephew at 7:13 PM