David Pinto has taken the bit in his teeth and has charged backwards in time with gusto, taking the Day-by-Day Database further into the past--now providing us with the ability to search all the way to 1937 (as of this morning). More kudos to David for doing so, as it will give us much more to chew on.

And we'll get chewy here this year by presenting fairly detailed leader boards using the 3-month slice approach that's been previewed here in the past. This will be accompanied with the all-time leader lists (as exemplified in the recent post about highest HR totals in a 3-month slice).

We begin at what's currently the beginning: 1937. (David may yet go further back: we'll keep an eye on him and do a mid-course correction if he continues to forge further into the past.) Here we have the leaders across both leagues (combined together) for the first three months of the year (4/1-6/30): 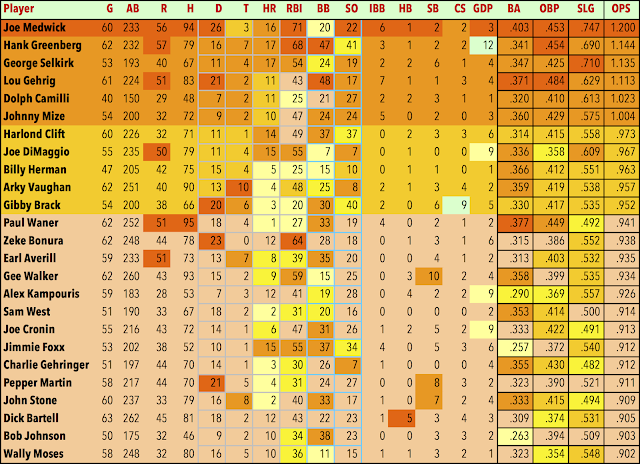 In case you're straining to remember: yes, this is Joe Medwick's triple crown season with the Cardinals, where he winds up hitting .374 and leads the NL in twelve statistical categories (left to right across your dial: G, AB, R, H, D, HR, RBI, BA, SLG, OPS OPS+, TB). The relative paucity of power in the NL at this point (significantly lower R/G average in this time frame than the AL) gave "the other Joltin' Joe" the chance to lead the league with just 31 HRs. (Medwick was not a prolific long-ball hitter, finishing with just 205 lifetime homers.)

Over in the AL, Hank Greenberg is recovering from his mostly-MIA season in '36 with a year that will eventually produce 103 extra-base hits and a mind-numbing 184 RBI. (We'll see more evidence of that in subsequent 3-month slices in 1937). Speaking of the real Joltin' Joe (yes, DiMaggio), he will also pick up the pace as the year progresses, winding up with the HR crown (46, easily his highest season total). And, as you'll see, his extreme free-swinging days (carried over from his rookie year) will soon come to an end.

This three-month window also represents "the last hurrah" for Paul Waner as a truly dominant hitter. In the second half of '37, "Big Poison" retains a healthy-looking BA, but his OPS slips under .800 as age (he's 34 in this year) finally catches up with him. His young teammate Arky Vaughan (25 this season) will get hurt a bit later in the year and fade into his least productive season since his rookie year (1932).

Zeke Bonura had his most productive year in 1937, and his pace here would lead one to believe that the slow-footed slugger from N'awlins would have a 150+ RBI year for sure, but Bonura got "cute" in August and stole home in a game against the Tigers, severely injuring his groin in the process. He didn't return until late September, winding up with 100 RBIs for the year.

Finally, these three months represent the temporary, fleeting stardom of Gibby Brack--who claimed to be 24 (he was really 29)--in his major league debut with the Brooklyn Dodgers. He would hit .209 from July 1 to the end of the year, and found himself with the lowly Phillies the following year, playing his last game in the majors in 1939.

More soon. Once again, kudos to Mr. Pinto--you will never be rear-ended at this site, David!!
Posted by Near-Genius Nephew at 10:29 AM