In the tiny-bubble world of baseball innovation, the Tampa Bay Rays continue to give us much. But even Kevin Cash may have gone too far last night when extra-inning desperation forced the Rays' manager to turn our favorite avoirdupois-challenged southpaw, Vidal Nuño, into a two-way player.

Nuño responded to this with the type of underdog intensity that one would expect from someone who is simultaneously marginal and overfed. With the Rays playing an interleague game in Miami, they were already letting pitchers bat; by the fourteenth inning, Cash was out of double switches--so Nuño found himself in the batter's box. 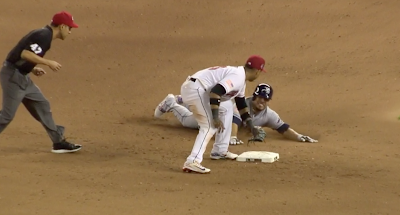 And before you could say boo, Nuño flared one down the left-field line that landed fair and rolled toward the stands in foul territory. Marlins LF Derek Dietrich got to the ball in a hurry and fired to second base--where Nuño, valiantly impersonating a baserunner, was trying to stretch his single into a double. (Vidal was 2-for-26 lifetime when the plate appearance had begun.) The result is telegraphed in our video capture... 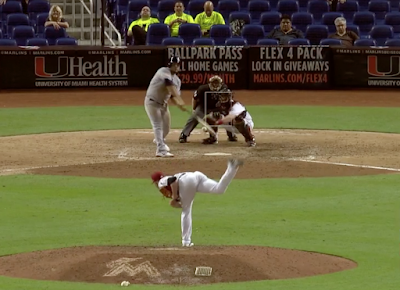 So into the sixteenth inning we go, and the Rays have taken the lead again when it is once again Nuño's slot in the batting order. Hoping to save his bullpen, Cash lets him hit again. The pitch from Brett Graves is low and over the plate--right in Vidal's, er, "wheelhouse"--and the portly one uses his modified "sand wedge" swing to slap the ball into the right-field corner.

This one drives in a run, and looks certain to be Nuño's first major-league extra-base hit, but as he "motors" down the first base line, he comes up lame, clutching at his right hamstring. He's stopped at first by the injury and has to be removed from the game.

The Rays go on to win, and Nuño gets his third win of the year (remember, he was 5-21 lifetime when recalled from the minors late in May)--but earlier this morning he was placed on the disabled list.

It's definitely a "story of my life" scenario for Vidal, who'd frankly been startlingly stellar (3-0, 1.50 ERA) as a cog in the Rays' fog-shrouded machine since his return from oblivion. Ironic, of course, that he'd get injured as a hitter, as if some kind of cosmic compensation was needed for having had the audacity to double his lifetime hit total in the space of two plate appearances...

So the sun has set on Nuño's empire, at least for the foreseeable future.
Posted by Near-Genius Nephew at 11:03 AM