All talk and no action remains the order of the day. First, in Washington DC, where a festering pustule on America remains propped up by a klannish cabal determined to create a terrorist theocracy around the conflation of two sense of the word "hoods" (as in the ones you wear over your head, and the ones who run the variegated forms of "numbers rackets" that keep the benighted akimbo on a fog-shrouded darkling plain. Three to six more months and the White House may simply need to be rebuilt, as fumigation is going to be woefully insufficient.

Second, baseball, where Rob Manfred is stonewalling amidst a hue and cry about homers and strikeouts that--as is increasingly the case for those infected with neo-sabe blight--is missing the mark. (But then again the neo-sabes have all made careers out of missing the mark, or perfecting a particularly tiresome and homogenous brand of snark, even as their rhetoric-disguised-as-reason has spread its ruin to baseball's front offices and pushed the game deeper and deeper into two-dimensionality.)

Whether taking a woefully simplistic route to a dim grasp of this long-term dilemma (Joe Posnanski, still five years away from recovering from his Joe Paterno cataclysm, pushing the "cave man theory") or upping the "brat pack quotient" with a centripetal "kitchen sink" approach to "factor analysis" (Ben Lindbergh, drowning in the perfect storm of two-fisted, two-faced and too-clever-by-half historical distortions and half-baked analogies), we are increasingly ill-served by those who've been anointed as the numbers-savvy pundits.

Each in their own way (Posnanski, shrugging; Lindberg, shaking his fist) is dodging an issue that has been building up in baseball--just as it's been doing culturally and politically in America--for about thirty years now. We have a "devil's chessboard" complex that's taken root in the nation and in our so-called "national pastime"--and it has been frog-potting inside the minds in a way that encourages short cuts in logic, false equivalences, dubious assertions thrust upon us via increasingly complex mathematical formulas and models which escalate dehumanization even as they purport to "describe" the world.

We inhale this stuff, we become intoxicated, we become war-like in our pursuit of partiality, and we all wake up twenty years later unable to see the forest for the trees.

The moral and ethical crisis in the nation right now is all about dumbing-down, which creates two-dimensional people who are easily manipulated. The structural crisis in baseball stems from those who are too clever for their own good and have dumbed down the game itself in pursuit of "truth." In both cases, we have become disconnected from our logical and moral umbilical cord, leading to an "every man for himself" quagmire.

Ironically, we will probably solve the cultural/political crisis more quickly than we will fix baseball. That's because the world is not a zero-sum game, and what's been festering for thirty years is finally hitting the fan in ways that can send the entire world off its axis. Baseball is just a trifle in the swollen river of humanity's larger maelstrom, and even if it continues to tether itself to a tiresome dalliance with the "Three True Outcomes" it will still have some structural linchpins to keep it from passing over into a realm of terminal boredom.

The most significant of those linchpins is the fact that the game inherently tends to produce close outcomes regardless of whether one plays the "inside game" of the Deadball Era or the "long ball/strikeout" model that has gone into overdrive since August 2015. (And, dear Mr. Manfred, we know what it is now--it's half the "science" of applied neo-sabermetrics turning the Marcus Semiens of the world into fly ball hitters, and the more tightly-wound ball--clearly a premonition of the more tightly-wound world that's borne down on us since August 2015, when the Orange Malaise became a candidate for "President"--has added 10-15 feet to their flies, making the Marcus Semiens of the world into 20+ HR hitters.)

As we were saying, the game itself produces close outcomes. Roughly half (just under 49%) of all baseball games--from 1901 to the present are decided by two runs or less. Which means that half of the games--regardless of how the runs are scored--will remain in doubt until the final inning, creating a natural tension that keeps the competitive side of human nature interested in the outcome. 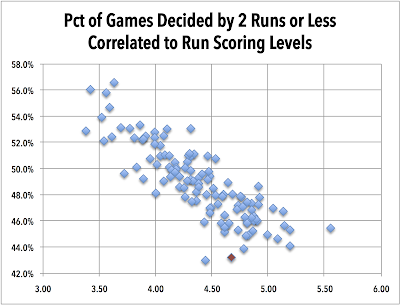 As you might expect, there's a correlation between run scoring and the percentage of close games. Stop and think for just a second, and it will be obvious to you: the fewer runs scored, the less likely that the score of the game will be lopsided. The chart at left shows that this is pretty much a linear proposition. (We didn't draw in the correlation line, but you can readily visualize it.) The fewer number of runs/game, the higher the close game percentage will be.

But there are some odd anomalies that start cropping up once homers/game begin to cross over the 1/1 barrier. The chart has one data point diamond shaded in red. That's 2017, with its current 1.26/1 ratio of HRs/games. Its run scoring level would project to about a 47% close game percentage. Instead, it's down at 43.5%. A certain number of games are falling out of the "close game" category as a result of this home run spike.

At the moment there is little evidence that baseball attendance is being affected by this. But a protracted period of this--and without any adjustments this particular situation could persist for some time to come--could have a cumulative effect on baseball's base.

What neither Posnanski nor Lindbergh are either able/willing to acknowledge is that the shape of baseball stats--specifically, the ratio of the number of extra-base hits (XBH), and the escalation of both isolated power (ISO) and the ratio of ISO to slugging average (ISO/SLG)--has been getting more extreme--more distended--for the past sixty years. Lindbergh has an incredibly misleading passage in his essay about changes in offense at the beginning of the live ball era where he intimates that ISO and ISO/SLG rose to "modern levels" in the 1919-1921 period. As our master chart of offensive averages by era (below) reveals, this is just not so. ISO and ISO/SLG, along with HR/G, are through the roof in 2017: 1.26 HR/G, .170 ISO, and .400 ISO/SLG (!!). It wasn't until 1929--near the absolute peak of the first offensive explosion--when ISO went over .130 and ISO/SLG went over .300. The levels went up and down in subsequent decades, with a kind of serpentine pattern--until we get to 1993. Even in the biggest downturn year since the end of our modern offensive explostio (2014), ISO never dropped below .135, and ISO/SLG didn't dip below .350.

Notice, though, that the shape of baseball stats can be radically different (compare 1920-39 above to the 1993-2009 timeframe) and still produce similar R/G averages. The HR/G totals in the era of Babe Ruth are shockingly low. Only a relatively small percentage of hitters actually adopted Ruth's hitting strategy--despite Lindbergh's claims, it took nearly ten years for them to fully do so.

Today, of course, even the so-called "banjo hitters" are adopting it.

Now "moral relativists" will look at this data and argue that this is the inexorable march of progress, science, etc. and that the game should simply be allowed to move forward along this "evolutionary" path. They can argue that this path was dictated long before advanced metrics and scientific analysis came into play. And, to a certain extent, that's true. But look at how HR/G jumped in 1993, with changes in ballpark construction, the baseball, the steroid boondoggle, and the beginnings of what has become a floodtide of analytics departments (capped by Statcast and the inevitable homogenizing effect stemming from baking the Tango Love Pie™into the crooks and nannies of that data effort). Look at the jump in ISO and ISO/SLG from 1973-92 to 1993-2009.

These are the ambient conditions that no one seems to have any framework for adjusting (except doing something surreptitious with the baseball). Modern ballparks have virtually no "wiggle room" to adjust distances, as was often the case in decades past. The game has slowly but surely been frog-potted into an approach that places ISO in the driver's seat.

Now let's be sure that you understand what we are advocating here. We don't expect to be able to go back to ISO and ISO/SLG levels prior to 1950. What we want to see happen is a significant change in the shape of extra-base-hit distribution. We cannot achieve this by deadening the ball--that would only lower offense and homers: it would not change the frequency of triples, which remains a crucial step in adding excitement and variety back into the game. (Those of you who've previously read about our infamous, off-the-wall "190 foot rule" know that we will never let that idea lie fallow for very long--and it would remain a centerpiece in any set of rule changes designed to adjust the ratios of extra-base hits.)

So just how would we go about doing that? How could we even do that, given the corner that the game and its dumbed-down sophistication at the hands of neo-sabermetric lockstep has painted itself into?

You'll just have to wait until the next installment, won't you...
Posted by Near-Genius Nephew at 9:15 PM