Still too busy to post anywhere near regularly--French noir is a harsher mistress than the moon (take that, Jimmy Webb!)--but here, at least, is a follow-up that will prove suitably astonishing.

Last year (before the undertow made us predominantly AWOL...) we were pretty much first on the scene with the report that pitching dominance in the 2010s had come to a shocking halt. We did this with a look at monthly HR/G totals which showed that something happened in August 2015 to turn the game back toward the HR levels seen at the apex of the "offensive explosion" in 2000. 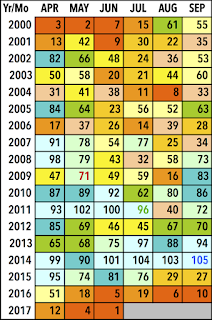 It was last June that broke things open--and, after a slight dip in July, both August and September remained red-hot in terms of HR/G. (The new revised rankings, including the first three months of 2017, show August and September 2016 as having the highest HR/G for their respective months in the seventeen complete years of data. The month of September had traditionally been a down-turn month, but not last year--the revised rankings show it coming in as #10 in HR/G for the 105 months in the data sample.)

And, as the chart at right demonstrates, that pattern has further intensified in 2017. This April ranks #12 in the data, trailing only April 2000 (#3). May pushed into the Top 5 all time (#4). And with six more days to go in June, it is looking certain that we will have a new #1 in monthly HR/G rankings. Right now June 2017 is shattering the record for HR/G, and even the R/G (5.02) are creeping up toward the averages compiled during the "offensive explosion" years.

The big question, of course, is just what happened in August 2015 to turn around the HR/G rate. There have been blips now and again over the 17+ years of data--check out June 2005, for example, and August 2009 was another example of a HR/G spike.

So, to get back to the "if/then" clause in the title block, this should be bringing us another attendance boost, right? Assuming that "chicks" really do "dig the long ball," that is. But at the moment at least, attendance is down, slipping below 30,000 per game. Could it be that all these big flies are getting a bit tiresome?
Posted by Near-Genius Nephew at 10:32 PM