As always, apologies for the scramble--there is just too much happening all at once these days...

We want to examine, as simply as possible, the claims made by various members of the "me-me-media" concerning the purported proliferation of young talent in the game during the 2015 season. Are we living through a year that offsets all of this peculiar (even by American standards...) political buggery by virtue of the fact that a crop of fuzzy-cheeked Hall of Famers are parachuting into our consciousness?

Sure, sure, the me-me-media folks didn't put it that way--and why would they slam together the two areas in American culture that wonk the wonk without walking the talk? Really, now, what's in it for them? We need rosy news somewhere, n'est-ce pas, so why not get teary-eyed about young athletes while they still stir our hearts and loins?

But the question, of course, is whether 2015 is a year where young superstars are mega-abundant at levels never seen before. And the answer to that question is to be found, as it often is, in two of our patented "decade-year" charts.

The first chart shows us all of the players aged 23 and younger who qualified for the batting title and had OPS+ values of 100 or higher in any given season. While this doesn't directly address the issue of Hall of Fame talent because it's not restricted to "dominant" seasons by young hitters (some of whom, in fact, flame out...), it does show us the ebb and flow of good-to-great young hitting talent over the course of baseball history.

In other words, it actually shows us something more than what we were originally asking, which is (usually, at least...) a good thing.

What the chart shows us is that young players were exceptionally abundant in the primordial years of the sport, when the playing conditions were more primitive and careers were shorter. The start-up of the professional game clearly began with something of a selection bias, which explains the high averages of  good-to-great young hitters in the 1870s and 1880s.

After that, there's a lull in great young hitting talent until 1909-10, which ushers in a solid little spike in the 1910s. We have a few small spurts (late 20s, late 30s-early 40s), but there is no big spike again until the 60s and 70s...and, despite continuing expansion, the amount of young hitters having good-to-great offensive seasons has drifted downward over the past three-and-a-half decades.

2015 is definitely an up year, but it is not a dramatic increase. (True, there are some young players, such as Keith Schwarber and Carlos Correa, who don't show up on this list, but qualifying for the batting title is a more than reasonable data constraint for such a study.) 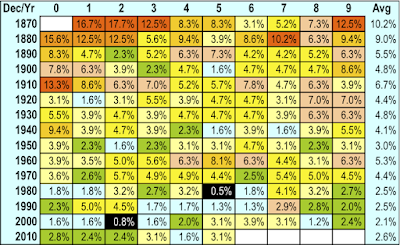 And when we do this, it tends to level out the data a bit more--and it explains why some people think that the influx of young hitters in 2015 is such a big deal. We see the early selection bias in baseball first two decades even more clearly; we see that the 1910s are cut down some due to the existence of the Federal League.

We see that the 50s weren't quite as bad as the raw data made them look, and the 60s and 70s weren't quite so spectacular because expansion created more available hitting slots.

And we see that young hitting talent in the baseball hasn't been over the historical average (4.3%) since 1992. Baseball's offensive explosion in the nineties may have been aligned with players in their young prime (24-27) coming into their own just as conditions began to seriously favor them.

As you can see, good-to-great young hitting seasons bottomed out in the 2000s--part of a long-term downward trend that had a brief reversal in 2005-7. The uptick in 2013 was overlooked because there were no real "supporting" players (like Schwarber and Correa this season) to add subsidiary bulk to the group.

So, with the subsidiary bulk in play in 2015, and a bonafide uptick to boot, it's easy for some people to get overly excited about the crop of young players out there and hype them prematurely.

We'll know a lot more about this in 2017, when we see if any of these hitters are flashes in the pan.


Posted by Near-Genius Nephew at 9:29 AM