The Boston Red Sox remain in the hunt despite all type of catastrophe in the first third of the '12 season, but the evidence (as manifested as recently as last September...) indicates strongly that they'll be needing more starting pitching. They're not alone--everyone needs more starting pitching (except, of course, for me and my monkey).

Hence the rumors swirling about a trade featuring the original rivet head, Kevin Youkilis. With injuries keeping two high-priced hurlers (John Lackey, Daisuke Matsuzaka) on the disabled list, and inconsistent performances from every starter except young Venezuelan lefty Felix Doubront, the Sox have to be sorely tempted.

It's conversion project Daniel Bard who's keeping the Sox up at night. Bard gave ground as a reliever last season; that, coupled with the loss of Lackey, prompted Boston to embark on a dicey maneuver and drop into the rotation a pitcher who struggled mightily with his control when starting in the minors.

The Red Sox have veteran Vicente Padilla in their bullpen right now, so they always have the option of swapping him with Bard--who had his worst outing just the other day. But the rumble of something bigger seems to be in the air, even if most of the sound is coming from the clitter-clatter of laptops.

Bard's struggles remind us that as 2012 spreads out against the sky like a patient euthanized upon a table (hey, that's the way Ezra wanted it to read...), we are suddenly seeing the return of truly wild-ass pitchers. The chart below collects fifty-one starting pitcher seasons from 2000 to the present in which the hurler is walking at least one batter every other inning. 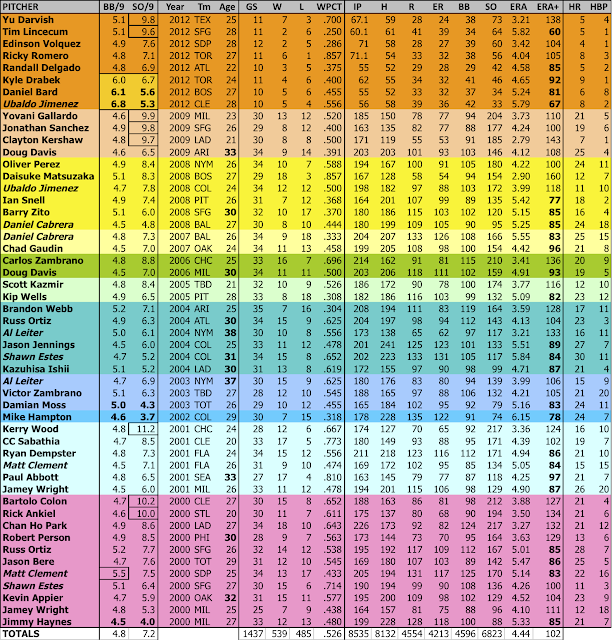 As you can see, we hadn't had such a starter (we're showing only those who qualified for the ERA title) since 2009.

Right now we have three of 'em--the backsliding Ubaldo Jimenez, Toronto's Kyle Drabek (who's clearly not a chip off the old block: his father Doug was a control pitcher), and Bard.

These fifty-one pitcher seasons are rather interesting if only for the range of names on the list--and the range of results. Overall, these guys are just barely above league average (a 102 ERA+) but there are some fine pitchers here (Clayton Kershaw, C.C. Sabathia, Carlos Zambrano, Brandon Webb) who moved through this walk-on-the-wild-side phase of their careers and became aces (at least for awhile).

This is mostly a young pitcher's list: only eleven of the fifty-one pitcher seasons involve hurlers age 30 and older. Most of these guys, regardless of their age, have earned a reputation as being, well, "enigmatic."

It's the range where, in the parlance of QMAX, guys live in what that system likes to call "the power precipice." However, most of today's pitchers don't really have enough hit prevention working for them to make it into that region of the QMAX chart. Only Drabek's teammate Ricky Romero really shows signs of doing that. 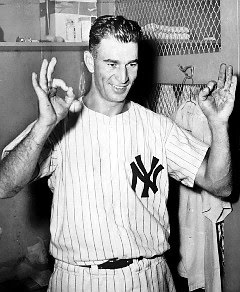 So for the sake of (yet) another QMAX tutorial, and to view the QMAX chart of a man whose wild-ass antics are beyond definitive, let's look at the comps between Bard, his current AL East wild-man counterpart Drabek and the once-future-always Emperor of the Power Precipice: Tommy Byrne.

There is nuance in QMAX Land, as it distributes starts against its matrix of hit/walk prevention, creating subtler patterns that provide insight into patterns based on assigning individual starts their own win probabilities.

In other words, all QMAX charts, even for wild men living almost exclusively on the right side of the chart are not created equal. Both Bard and Drabek, like Tommy Byrne, are often too wild to be hittable, but neither man has a single "1S" (the most dominant hit prevention game) to his credit in 2012.

As we've noted before, 1949 was an astonishing year for bases on balls, especially in the American League. And Tommy Byrne was the most wild-ass of 'em all.

The QMAX winning percentage (QWP), however, also demonstrates that the basic QMAX score isn't equal. Byrne's greater hit prevention trumps his virtually non-existent control. As a result of getting so many of his starts into the "Power Precipice" (the box in the top-right region of the QMAX chart, a total of 16 starts--a staggering 53%), Byrne grades out as a winning pitcher (.560 QWP).

Drabek and Bard, not nearly so dominant, with less than a quarter of their starts in the "power precipice" region, don't even grade out as winning pitchers thus far in '12. Drabek grades out higher than Bard, however, due to his ability to reach the Success Square (the yellow region that isn't actually a square--remember who invented this!) more frequently (45% as opposed to just 20% for Bard).

Now, you ask, is there any predictive value in all this? After all, while this is a probabilistic measure and all that, it's still a snapshot of past performance. What we can tell you is that, in more than 80% of the cases where there's a divergence in the QWP for two pitchers with essentially equivalent "T" scores, the pitcher with the higher QWP turns out to be more successful over the course of that season and just over 70% are more successful over the course of the next 3-4 years.

But let's also remember that these are pitchers at a particular extreme of performance. Most pitchers who stay in the "power precipice" region lose their hit prevention skills and regress. Bard's declining strikeout totals, and his inverse K/BB ratio, are red flags. 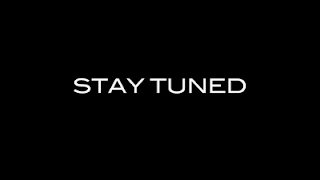 Clearly the Red Sox know this, even without QMAX. Bard's struggles in the first inning look a lot like Byrnes' epic walkfests in the opening frame back in 1949--except that no one could hit Byrne. A decision is going to need to be made soon about what to do with him--soldier on; flip him with Padilla;  or cash in Youkilis via a deal that nets a more established pitcher, while letting Bard work out his first-inning kinks at AAA for awhile. As we like to say...

[UPDATE: The Red Sox optioned Bard to AAA Pawtucket. Speculation is that Matsuzaka, who's ahead of schedule on his rehab from Tommy John surgery, may be ready to return to Boston's rotation as early as this coming weekend. Should that happen, we should expect Youkilis to hang around at least until the end of July, when the Sox will have a better sense of what they'll need for the balance of 2012.]
Posted by Near-Genius Nephew at 11:56 PM