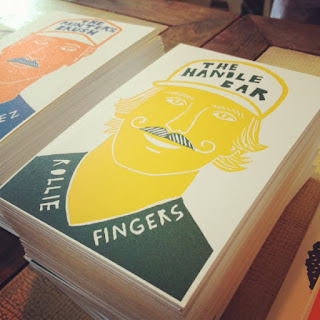 Amelie Mancini just returned from a West Coast road trip--one that did not (alas) coincide with a similar journey by her adopted team (the New York Mets), but...after many good times and (unsurprisingly...) a trip to several baseball stadia, she's back in Brooklyn.

Which, glory of glories, means a new series of her singularly sensational baseball cards. Series #3 from her company, Left Field Cards has been released--it features marvelous moustaches. As has become the tradition, there are two packs of cards, five to each pack, and Amelie has demonstrated her artistic acuity in classifying the intricate sub-species of facial hair.

As you might expect, the players represented in this new series are dominated by those who played in the seventies and eighties:

Before you go to the site (where you should plunk down the nominal purchase price--for yourself, a friend, or a family member), take a moment to see if you can match the names of the moustaches that Amelie has created with the players who wore them on the ballfield.

Give it a shot. We've given one answer away already--actually, two (if you're paying attention). That should get you started.
Posted by Near-Genius Nephew at 10:24 PM