Baseball is back!!...kinda sorta. This is how we do it in the not-nearly-twilight-enough phase of the Bud Selig (BS) era, where the National Pastime gets hustled over to Japan for a whacked-out "pre-opening" that is played while two-thirds of the country is asleep. (In the immortal words of Bugs Bunny: "What a maroon!")

At least Ichiro! is happy. The ancient Mariner slapped out four hits in front of his countrymen, floating a feeble thought balloon into the pink-eyed sky about crashing though for one more 200-hit season.

One thing's for sure in this sorta kinda stupid Opening Day giveaway--Ichiro! is likely to be the major league hit leader for at least seven to ten days. Who knows, he may have a clause in his contract that awards him bonuses for that...

Ah well, it gives us an excuse to publish his bobblehead again.


•
Speaking of the Ancients: we are so out of our element by tapping our keyboard in praise of 49-year old wunderkind Jamie Moyer, who is getting more ink than anyone as he tries to sneak his 80 MPH fastball by the firing squad of Father Time.

That said, one has to wonder if Jamie can possibly make this work. His latest comeback effort, currently underway after he missed the entire 2011 season after having reconstructive arm surgery, is being taken in support of the Colorado Rockies--who really seem like just about the worst ballpark matchup for the ol' Crafty One... Lifetime ERA for Jamie at Coors Field? As you might expect: 9.00.

That's kinda sorta likely to take some of the purple haze out of the picture the Rox orchestrated for Jamie when he first joined the club in the spring.

Now, Jamie's holding his own in spring training. His most recent outing (earlier today, as 90% of all baseball clubs played exhibition games...) was a bit rough, but signs are still encouraging that Jamie will open the season in the Rox rotation.

Until Coors Field puts its own special "rotation" on him, that is.

For those who pay attention despite all indication to the contrary, Jamie is the answer to one of our trivia questions. And this is an answer that none of the other Moyer-i-fyin' sites that have cropped up like crabgrass after a downpour is going to be able to provide you: it's one of the spiffy little facts that even a Triple-A weisenheimer like J-Dub is kinda sorta going to fail at presenting to you, the reader that demands only the unutterably obscure.

We've got it for you here. The question was: who is the pitcher who's given up the most homers on the first pitch?

And, of course, the answer is Jamie. That's happened 84 times. Only fitting, you say, for the man who's given up the most homers in baseball history? (What's that total again? It's at 511 and counting.) 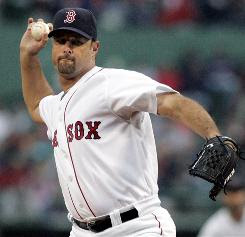 The recently retired Tim Wakefield, by the way, is a close second to Jamie in the first-pitch gopher sweepstakes: he had it happen to him 83 times.

All of which makes us, despite our love and admiration of all things Jamie, kinda sorta wish that when he delivers his very first pitch in the 2012 regular season, it will be turned on and hit out of the park.

After which, of course, Jamie will settle down, throw a few brushback changeups, and keep his opponent off-stride for the rest of the day.

Farfetched? Kinda sorta. But, after all, somebody has to specialize in it.