The Quality Matrix (QMAX) verifies what a number of other analysts and the other numbers suggest--it's a tight, tight race for the 2015 NL Cy Young Award. 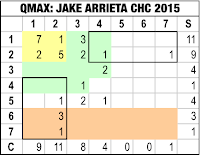 For those who've crawled under a rock at any point over the past twenty years, QMAX was the first of the "counterintuitive" performance measures for starting pitchers, utilizing a matrix grid to measure performance quality and then calculating a purely probabilistic performance value, the "QMAX winning percentage" (with the impish acronym of QWP, or "quip" for short). 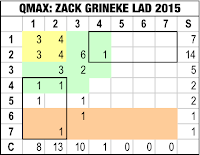 With several tweaks over the years to better represent total bases allowed per start, QMAX is better than ever and we remain convinced that it provides the most accurate set of measures for starting pitcher performance.

For 2015 in the National League, QMAX shows a close three-way race between Jake Arrieta of the Cubs (whose revised pitching style strongly reminds us of Denny McLain), and the right-left combo of the Dodgers, Zach Greinke and Clayton Kershaw, who've already collected three CYAs between them. 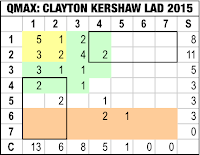 The QMAX matrix boxes for the six leading pitchers in the league (in alpha order: Arrieta, Gerrit Cole of the Pirates, Jacob DeGrom of the Mets, Greinke, Kershaw, and Max Scherzer of the Nationals) are displayed on the right. 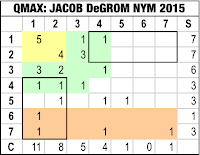 We see that Arrieta has the most "1S" games (the top row of the matrix box), His second-half performance lifted the Cubs away from the pack and (as we write this a week later than the date on the post--amazing how we do that, ain't it?) into the NLDS with yet another 1,1 game in the wild-card shootout game, where he outpitched the Pirates' Cole.

Greinke did not dominate in "1S" games to the same extent, but he made up for that with a bushel of "2S" games, tighter control (as measured by the "C" axis of the chart--the columns that classify walk prevention) and few "hit hard" games (the bottom two rows which depict what are generally the worst outings of starting pitcher). 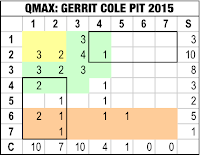 Kershaw's matrix chart is similar to Greinke's. After a slow start, Kershaw pitched almost as well over his last 25 starts as Arrieta did over his last 20 (at least according to QMAX: the ERA values differ a bit more, but it's clear that ERA can be affected by transient factors, particularly in smaller sample sizes).

QMAX tells us that the Mets' DeGrom was the fourth best starter in the NL in 2015, with only a few stray "ultra-bad" outings (the "7S" row) that betrayed him. 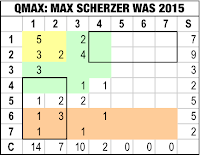 Cole and Scherzer, despite either excellent won-loss records or ultra-impressive individual games (Cole's .700+ WPCT, Scherzer's two no-hitters), were a bit further down the pantheon. The big problem for these two was a higher number of "hit hard games"--Scherzer in particular (a total of twelve starts in which he gave up more hits than innings pitched, and a stretch in August where he was extremely susceptible to the long ball).

We put the matrix box info together into a summary report that captures the essential performance data--the percentages of games within key regions on the chart: the "Success Square" (the not-quite-square green region, where pitchers win from fifty-five to ninety-five percent of the time); the "Elite Square" (the interior yellow region where the average team WPCT for these games is over .800; the "S12" or "top hit prevention" region, where Greinke and Arrieta hit over sixty percent of the time; the previously mentioned "hit hard" region, where Greinke and Kershaw were both under ten percent; and other measures of more counterintuitive success regions ("Power Precipice" or high walk-low hit, in the region at upper right, "Tommy John" or high hit-low walk, in the region at lower left); plus measures of control ("C1, "C13", capturing the values for games cut across the columnar data instead of the rows, which measure that elusive concept known as "stuff).

When we do that, we get the table above, which suggests that Greinke is the narrow winner, by virtue of a better score in the basic QMAX averages, appearing the three rightmost columns.