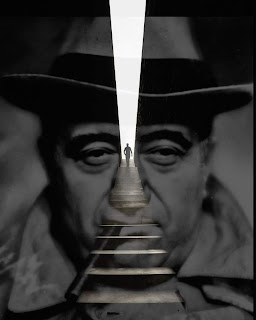 French noir is a beast, but we have wild imagery from it that will baffle and bewilder...as time permits some posting here, we'll foist these off on you as if it somehow had something to do with the purported subject of this rag-tag blog (which, of course, it doesn't). No matter: it's our blog and we can digress when we want to.

(Wild image, though, right? Given the state of the USA as we enter the summer of 2019, you may be feeling just how the great French actor Raimu felt when we shoved a set of stairs upside his head. We call it "double exposure"--you can call it what you like.)

Fifty years ago tonight, there were nine games on the schedule (out of a possible twelve: 1969 was baseball's most unruly expansion year, with four new teams in the same season). A total of thirteen home runs were hit in those games, which works out to .72 HR/team game: just a bit more than half of the rate we're seeing in 2019. (There has been a game this year where teams combined to hit 13 HRs in a single evening--with liftoff like that, you might just be able to land a man on the moon. Pretty sure who 60% of America would like to send up to "green cheese exile" right now.) 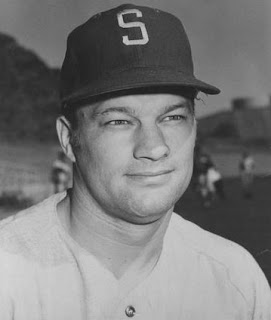 After the games June 19--two days before the beginning of the third and final "summer of love" and two months before Max Muncy's grandfather got the idea to name his son after a Republican dairy farmer (Max Yasgur) by flying his freak flag at Woodstock--the Orioles were playing .734 ball (47-17). Their reckoning would come on the day after the Vietnam "Moratorium Day" protests--but we're getting ahead of ourselves. The Expos and Padres, en route to 110 losses apiece, were a combined 42-86. The Chicago Cubs were cruising along at .641 (41-23), some six games ahead of the upstart New York Mets.

June 19, 1969 was something of a high-water mark for Jim Bouton, embroiled in his diary-stained season in Seattle: in an uncharacteristically high-scoring game at Comiskey Park, the Pilots' cheeky knuckleballer pitched four solid innings in relief even as all hell was breaking loose around him. He even got an at-bat in the game, extending a three-year streak of going hitless at the plate. The White Sox eventually won, 13-10. 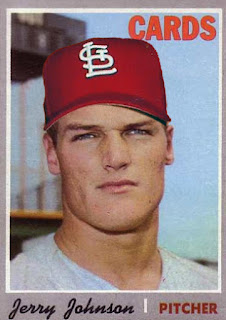 Perhaps the most consequential game that day, however, featured those pesky Mets, playing in Philadelphia just a few days before Dick Allen would be suspended for a month in what would prove to be his final altercation with Phillies' management (at least in the 1960s!). In the midst of a streak where they'd won fourteen of their last eighteen games, the Mets sent Tom Seaver to the mound against lantern-jawed Jerry Johnson, an ex-Met farmhand who would accompany Allen to St. Louis as part of a fateful trade (Curt Flood) that eventually figured in the dismantling of the reserve clause. He'd soon have what was his single top-notch season after being traded to the Giants, where in 1971 he was a workhorse reliever (109 IP, 12 wins, 18 SV) and actually finished sixth in the Cy Young Award voting, but on this night he seemed over-matched.

But Seaver was a bit off, surrendering a run in the bottom of the first and setting up short-time big leaguer Gene Stone with a barroom story usable for the next four decades. Stone received his first major-league start in place of Allen when the slugging first basemen came up lame (or, as the ever-supportive Philadelphia press noted--so he said!) and faced Seaver with two outs and men at second and third--whereupon he received his first and only intentional walk. Manager Gil Hodges wanted Seaver to have the platoon advantage, so lefty Stone was passed and righty slugger Larry Hisle, who'd play 1100 more major-league games and finished fourth in the NL Rookie of the Year voting that year, came up with the bases loaded--and struck out.

The two teams see-sawed over the entire game, with each pitcher having problems with significantly weak hitters. The inimitable Al Weis, who'd wind up with a .215 batting average in 1969, rehearsed the first of his two big World Series hits with a game-tying RBI single in the top of the second. In the bottom of the third, catcher J. C. Martin threw out Johnny Briggs trying to steal second, which proved fortuitous because the next Phillies batter, offensive sinkhole Mike Ryan, a brilliant defensive catcher who'd thrown out 58% of runners attempting to steal the previous season, hit a home run off Seaver, making it 2-1. 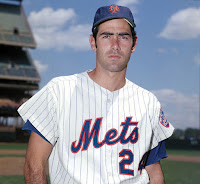 It got worse: Cookie Rojas took Seaver deep in the fifth. But the Mets had Art Shamsky, who'd regained his hitting stroke after hitting .197 and .236 in the last two seasons. And they got just what they need from him on this night: with Cleon Jones on first and one out in the top of the sixth, Shamsky hit the first of two late-in-the-game HRs he'd hit that night to tie the game. Two innings later--boom--his second homer gave the Mets their first lead of the game at 4-3. 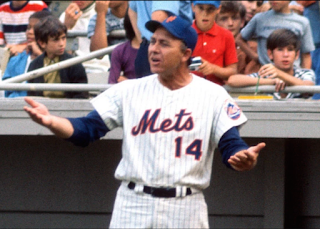 But Seaver and normally reliable reliever Ron Taylor weren't quite through giving ground. In the bottom of the eighth, Ryan doubled and Gene Stone tried to sacrifice him to third. But Stone got more barstool bragging rights when his bunt took a strange hop over Seaver's glove and wound up being a hit. Taylor came in and got a couple of outs, but manager Hodges decided to "play it safe" and intentionally walk the other Stone on the Phillies' roster--Ron Stone, who was hitting .150 on the year. This set up the force play at any base, but the next hitter--Rick Joseph--was more successful than Hisle had been in the first: his single scored two runs and the Phils took a 5-4 lead into the ninth. Enter Al Raffo, the gangly (6'5") rookie right-hander, groomed as a starter in the Phillies' farm system but converted to the bullpen upon his elevation to the majors in late April. Very effective of late (1.20 ERA in his past six appearances), he was getting a shot to be a closer. But the Mets' gremlins had other ideas for him: Martin, hitting .205, coaxed a leadoff walk. Next up: the enigmatic Ron Swoboda, batting for the downright baffling Al Weis. Trying to jam him, Raffo left a pitch out over the plate and the mercurial slugger (who over the next weekend would strike out in ten of his next twelve at-bats) lined a single to left.

Phils' skipper Bob Skinner (soon to get the axe after mishandling the Allen fiasco lying in wait for him) took no chances, bringing in Dick (Turk) Farrell, his top reliever. Pinch-hitter Jerry Grote bunted the runners over to second and third; Farrell fanned Tommie Agee for the second out.

But Skinner elected not to emulate Hodges by walking Ken Boswell--and the Mets' second baseman made him pay for that decision with a two-run single that put the Mets back on top, 6-5.

Tug McGraw pitched the bottom of the ninth, got two outs, walked a batter--and gave Gene Stone a chance for his first career RBI. Stone lined it into left, but Cleon Jones raced over and snagged the ball at his knees for the final out. It was just one of 64 one-run games that the Mets played that season, but it was part of a key turnaround in their fortunes. After going 7-9 in one-run games during April and May, the Mets went 9-3 in June and fashioned a spectacular 34-14 record in one-run games from June 1st through the end of the 1969 season.

By the way, Gene Stone never did get that first career RBI. Even when Allen was suspended, he did not get a chance to play first base, and was farmed out to AA, never to return.

Posted by Near-Genius Nephew at 11:43 PM