As we sweat out the ALDS games, let's look at a couple of charts that focus on ends and beginnings--in this case, starting pitcher performance during the last two months and the first two months of the 2012 season. 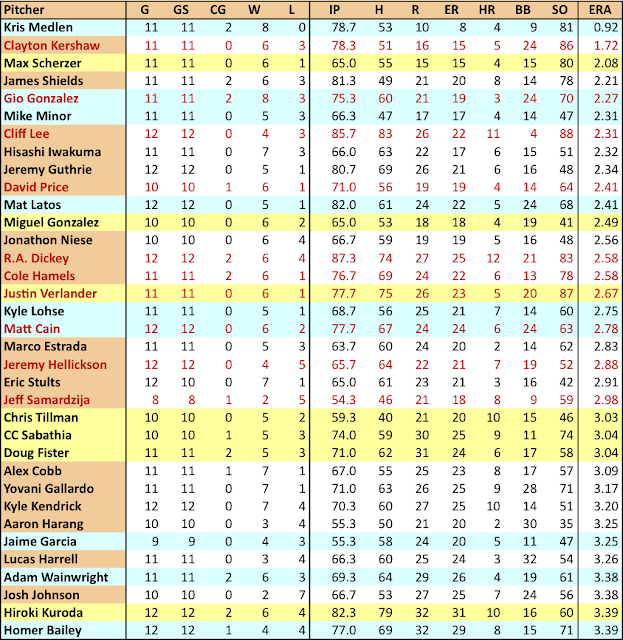 These are the top 35 pitchers sorted by plain old ERA. Pitchers who hurl for playoff-bound teams are shown in blue (NL) and yellow (AL). Pitchers whose stats are displayed in red are those who can be found both on this list and the one that follows for the first two months of 2012.

Lost in the Kris Medlen hoopla is the fact that Mike Minor had quite a solid performance for the Braves over the final three months of the season (he was actually better in July than he was in the sample shown here). Skeptics will note that he had a very low BABIP during this time frame (.223); but Minor's work was an important component in the Braves' second-half drive to the post-season.

All in all, sixteen of the top 35 starting pitchers toiled for playoff teams. So how does that stack up with the ratio of ERA leaders to post-season teams that we can trace for the first two months of the season? 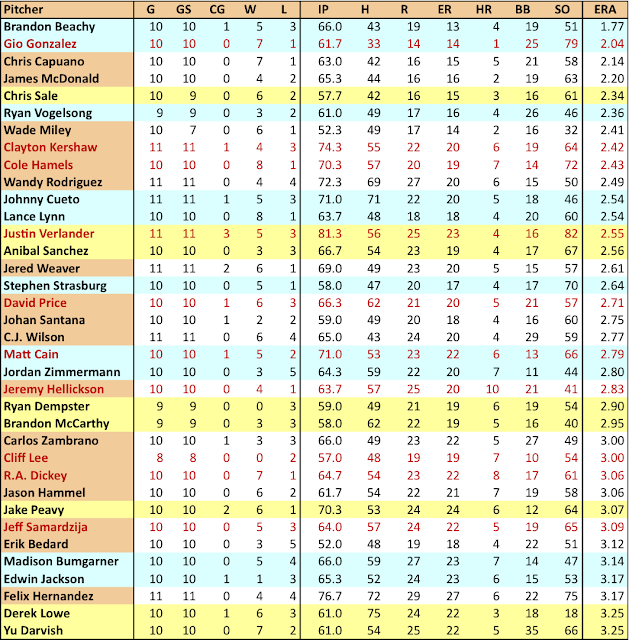 If you count it up, you'll see that eighteen of our 36 starters who landed on the April-May leader list wound up pitching for playoff teams. That's a bit higher than the "last two months" list, but there's a caveat here--three of those pitchers (Ryan Dempster, Derek Lowe and Anibal Sanchez) began the year pitching for different (and non-playoff) teams.

Pitchers on both lists: Gio Gonzalez, Clayton Kershaw, Matt Cain, Cliff Lee, Cole Hamels,  R.A. Dickey and Jeff Samardzija (!!) in the NL; Justin Verlander, David Price, and Jeremy Hellickson in the AL. One pitcher who's still considered in the running for the Cy Young Award didn't appear on either of these lists: Jered Weaver of the Angels, who did his best work in the middle months (8-0, 1.87 ERA). We'll go back and look at that "middle of the year" stuff when we're in the middle of the offseason...
Posted by Near-Genius Nephew at 8:05 PM