We know that, in general, hitters decline from age 30 onwards.

We know that for every exception there are dozens who prove the rule.

But we don't know exactly how the decline phase behaves over time.

So, for fun, we're going to noodle around with small player subgroups from a variety of single years, where we can look at players who are the same age and take a more detailed look at the aging patterns they display.

Why 1908? It's the lowest of the low in terms of offense in the deadball era. This is the trough of hitting performance in all of baseball history. Though it's not relevant to the parameters of the study being made, the fact is that 1908 just happened to have two of the most exciting and controversial pennant races in baseball history, particularly in the National League (does "Merkle's Boner" ring a bell? Does the name Pavlov ring a bell??).

We're looking at hitters who were aged 32 in 1908. That gives us a felicitously "unlucky" number of players in the sample: thirteen. We'll look at several of them in a bit more detail, but here are the thirteen (listed in descending order of their career OPS+): Elmer Flick, Charlie Hickman, John Titus, Charlie Hemphill, Ed Hahn, Johnny Kling, Freddy Parent, George Browne, Joe Yeager, Frank Isbell, Germany Schaefer, Pat Moran, and Billy Gilbert. 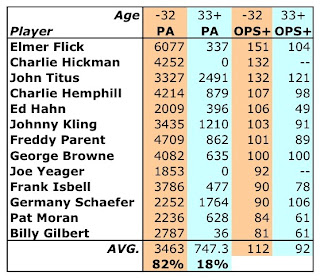 As you can see, our thirteen players (one Hall of Famer, one colorful good-hit, no-field type, one unsung hitter, nine journeyman, and a future manager) got 82% of their career plate appearances by the end of their age-32 season. That's a percentage that we'll be able to track when we examine future "yearly classes" of players as we move forward in time.

Before we look at the details of the career patterns for these players, let's provide some background for them.

Elmer Flick
One of the least known of all the members of the Hall of Fame, Flick played right field for the Philadelphia Phillies, Philadelphia A's, and the Cleveland Naps from 1898-1910. He only played in 1483 games, and was inducted into the Hall by the Veterans Committee in 1963. His lifetime OPS+ (149) is extremely impressive, but his career bypassed the traditional "decline phase" and substituted a kamikaze dive. In 1908, a severe gastrointestinal malady sidelined Flick and hastened the end of his big league career. Only 32 when his career unraveled, he packed a lot of offensive firepower into the front end of his career, with seven seasons where his OPS+ was higher than 150.

Charlie Hickman
"Piano Legs" Hickman would have been a DH if the AL had put that rule into effect as early as the 1900s. His defensive lapses were the impetus behind a series of trades that caused him to play for a total of seven teams in twelve years (1897-1908). Hickman wasn't a patient hitter, walking less than 4% of the time, but he hit .361 in 1902 and finished second in homers three times. The man could hit, but when he stopped doing so in 1908 (at age 32) there was no place for him to hide.

John Titus
"Tight Ass" Titus, as he was known to some of his teammates because he was exceptionally stingy with a dollar, was a late-blooming outfielder, arriving with the Phillies at age 27 in 1903 and producing consistently solid hitting and defense over the next eleven seasons. Virtually unknown outside the world of specialty baseball researchers, Titus quietly put up a sweet little career: he also continued to hit well into his late 30s. Allan Wood's SABR bioproject entry for Titus has a series of enjoyable anecdotes about him: among other things, he was probably the last player to wear a handlebar moustache until Charlie Finley started paying the Oakland A's to wear facial hair in the early 70s (though he's clean-shaven in our photo.)

Charlie Hemphill
Hemphill's career did not begin auspiciously in 1899: the rookie began the year with the St. Louis Perfectos but found himself palmed off to the Cleveland Spiders in the middle of the season. (The Spiders, in case you don't know, are the all-time worst franchise in baseball history, going 20-134 in 1899 as a result of a "franchise manipulation" that turned the Spiders into baseball's ultimate "uncompetitive team.") After a year in the minors, Hemphill returned to have a workmanlike career  playing center and right for four AL teams (Pilgrims, Browns, Naps, and Highlanders) from 1901 on. His best year: 1908.

Ed Hahn
Hahn's chief claim to fame was playing right field for Fielder Jones's "Hitless Wonders," the 1906 Chicago White Sox, who upset their crosstown rivals in the World Series. Hahn was a hitless wonder that year, batting only .227, but he could take a walk, finishing second in the AL in bases on balls in 1907. Brock Hanke likes to talk about players who have a small window of major league time that begins in their late 20s (Hahn's rookie year was at age 29) as players whose teams are "skimming the cream" off their careers, and Hahn was definitely one of those. His hitting just fell apart at age 33--.181 in 1909, .113 (!!) in 1910.

Johnny Kling
Kling was the starting catcher for one of the greatest baseball dynasties of all time, the 1906-08 Chicago Cubs. An extremely accomplished billiard player who won the World Championship in the 1908-09 offseason, he missed the entire '09 season--and the Cubs missed him, finishing second. Kling returned in 1910, and the Cubs made it back to the World Series. He was fondly remembered: the early BBWAA gave him a respectable amount of support in the early Hall of Fame voting even though he essentially stopped hitting after the '10 season.

Catcher Moran would retire in 1914 and immediately become a successful manager, taking the Phillies to the World Series in his first try in 1915. He's best known for being the manager of the 1919 Cincinnati Reds, whose post-season triumph that year was "aided" by the Black Sox. Moran died young, or he might have gone somewhere else and continued his pattern of taking his team to the World Series in his first year as manager.
The rest of these guys--George Browne (played RF for McGraw's pennant-winning Giants in 1904-05); Billy Gilbert (weak-hitting SS/2B for McGraw's Giants from 1903-06); Frank Isbell (infielder for the White Sox from 1901-09, hit .308 in the '06 World Series); Germany Schaefer (infielder for the Tigers and Senators whose hitting bloomed in 1910-11); and Joe Yeager (infielder for four teams from 1898-1908)--are the anonymous supporting cast type. These guys tend to have only one or two "career year" upticks.

Our chart shows that, with the lone exception of Titus, the best hitters here got established early in their careers. The sections highlighted in yellow point to the "iambic" or "serpentine" development pattern that's fairly common in young players. (We'll be keeping track of this feature, if only to pass the results back to Brock Hanke, who's been waiting for a way to obtain some more empirical data about these matters.)

It also shows that it's age 30 when player usage peaks for these guys, and that the number of plate appearances in 1908 for this group begins to nosedive. You can see the "selection bias" coming into play at age-34, when most of the bad hitters have retired; and earlier at age 24, when Flick and Hickman have excellent seasons but there's no one else with any significant playing time.

I was more than a bit surprised at the number of late or delayed starts in this group, and that Flick (whose presence in the Hall of Fame makes it seem that he had a "short career") is the player here with the most lifetime plate appearances.
Posted by Near-Genius Nephew at 1:31 AM